Home > News and statements > Tsunami warning: France and the CTBTO at the service of the international (...)

Tsunami warning: France and the CTBTO at the service of the international community

5th November is the world tsunami awareness day. Although it is impossible to prevent such natural disasters to occur, France and the CTBTO have decided to allow the international community to benefit from their expertise in seismic detection in order to enhance the tsunami warning and populations evacuation systems.

Tsunamis are rare events, but can be extremely deadly. In the past 100 years, 58 of them have claimed more than 260,000 lives, or an average of 4,600 per disaster. The highest number of deaths in that period was in the Indian Ocean tsunami of December 2004. It caused an estimated 227,000 fatalities in 14 countries, with Indonesia, Sri Lanka, India and Thailand hardest-hit.

The Global Alarm System of the Comprehensive Nuclear-Test-Ban Treaty Organization (CTBTO), designed to detect all nuclear explosions, can also detect earthquakes that can cause tsunamis. The information is picked up by seismic and hydroacoustic stations which monitor underground and the oceans respectively. It is provided by the CTBTO in near real-time to tsunami warning centres, in particular those covering the Pacific and Indian Oceans, to help them issue more timely and precise warnings. At present, tsunami warning centres in 14 countries with a high tsunami risk receive data from around 100 CTBTO stations. You can find out which Member States have concluded a tsunami warning agreement with the CTBTO in the Country Profile pages. 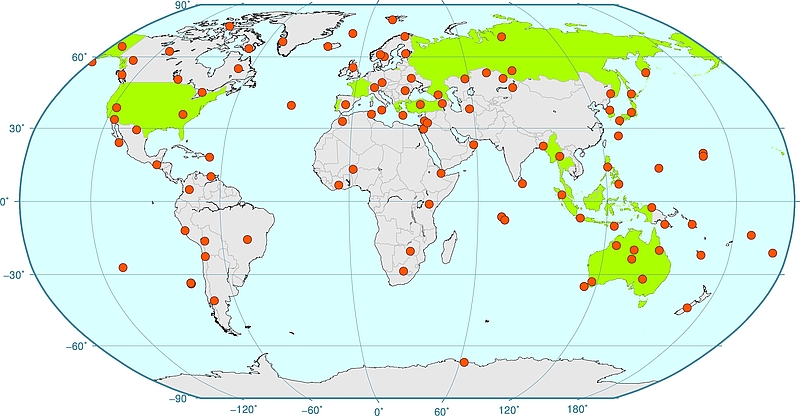 Tsunami warning centres in 14 countries (in green on the map) currently participate, receiving data from around 100 IMS stations (in red).

The CEA, as part of his historic mission to fight against nuclear proliferation, is also responsible of the surveillance and detection of seismic activities. Many seismic stations are spread throughout the world. They are part of international (Iris, Geoscope, etc.) or national (e.g. the RESIF for France) networks. Most of the collected data are now immediately available through the internet, allowing the relevant institutes (NEIC in the United States, CSEM in Europe, etc.) to public seismicity inventories, which can bu used to quantify earthquake hazard or to produce tsunami warning when a high livel earthquake is detected. In 2004, the Sumatra tsunami has been a world marker: at that time, only 2 tsunami warning centers existed (in the US and in Japan for the Pacific ocean), ; the international community then decided to establish tsunami warning systems in all ocean regions. Moreover, as part of its less known activities, the UNESCO was given the mandate to coordinate the establishment of these systems and thus created the intergovernmental coordination group for the tsunami warning if North-East Atlantic, the Mediterranean sea and related seas. Based on the strong expertise of its team in the detection of nuclear tests, the CEA is also in charge of detecting all natural seismic event, to locate it quickly, to calculate its magnitude and to produce a relevant alert for the public authorities. This is done by the Département analyse, surveillance, environnement (DASE), from the Direction des applications militaires.

These activities are not limited to detection but also take into account studies of earthquake risks in specific regions.

Moreover, in a zone going from the north-east Atlantic to the western Mediterranean sea, a partnership has been established with the Service hydrographique et océanographique de la marine (SHOM) and the Centre national de la recherche scientifique (CNRS), to allow the CEA to create and operate, as requested by the ministries in charge of the civil security and risk prevention, a tsunami warning center : the CENALT. Located in the CEA center of Bruyères-le-Châtel (Essonne), this center has been given the mission to alert national authorities in charge of populations protection and to inform neighboring countries of the western Mediterranean sea.