The CTBTO prepares for an On-Site Inspection implementation [fr]

In cooperation with States signatories, the On-Site Inspection Division (OSI) of the CTBTO as coordinated, from 11 till 15 November 2019, an exercise aiming to reproduce the launch, validation and preparation phase of an on-site inspection. Two French inspectors from the Ministry of Defence and from the CEA participated to this exercise. The next phase of the exercise (operating the on-site inspection) will take place in June and September 2020, in Slovakia.

The On-site inspections of the CTBTO

After the entry into force of the Comprehensive nuclear Test Ban Treaty (CTBT), the final measure to be taken to state if a clandestine nuclear explosion has been carried out by a Stet party to the CTBT will be the possibility to conduct an on-site inspection, that is to say on the territory of the suspected country. Such a possibility, that will have to be requested by any State Party to the CTBT, will abide to very precise validation, preparation and implementation criteria in order to assure a balance between the action capability of the inspection team and the necessity to preserve the sovereignty of the inspected State.

Thus, if clarifications and transparency measures after a suspicious detection (seismic, radiological) by the stations of the International Monitoring System (IMS), in line with analyze of the International Data Centre (IDC), cannot clearly conclude. The goal of the on-site inspection will be, after an authorization of the Executive council, to send a team of international inspectors (non permanent CTBT staff), which composition will have been approved by the States parties and the Director General, in order to proceed to analysis, in situ sampling and measurements according to a very strict regulatory framework : a maximum of 40 team members, an inspected area limited to 1000 km2, an initial duration of 60 days that can be extend to 130 days only by approval of the Executive Council, implementation of only pre-agreed techniques according to the Treaty... The Executive Council will then give its final opinion based on the information and report delivered by the inspection team.

The implementation of exercises is an important step into the expertise building process of the CTBTO, for they enable to experiment, in "real life situation" the organizations, the procedure and the infrastructure that have been developed, along with the expertise of the trained inspectors.

The latest major integrated field exercises (IFE) took place in 2014, in Jordan. It led to an action plan composed of 43 projects dealing with inspection procedure or device testing, for example. This action plan is expected to be completed by 2020.

From 11 to 15 November 2019, staff from the CTBTO Provisional Technical Secretariat, and surrogate inspectors coming from the States signatories have simulated the launching phase of an on-site inspection, which starts with the detection of an unusual activity and ends with the departure of an inspection team from Vienna. This phase covers thus the inspection request by one or several States signatories then the convocation, within 96h, of an extraordinary session of the Executive Council of the CTBTO. After approval, the inspection team has to arrive in the inspected State at the latest6 days after the request.

During these days, inspectors from the entire world came to Vienna to interact, under the supervision of a scenario control team, and to work on the technical, logistic and legal aspects that would enable the mandate, validated by the Director General, of the inspection team. For France, two experts coming from the Ministry of Defense and the CEA participated, in line with the Military Counselor of the French mission, who himself was part of the external evaluation team.

The exercise implementation and the conclusions to be drawn will be discussed during the next session of the CTBTO Working Group B, in in February 2020. 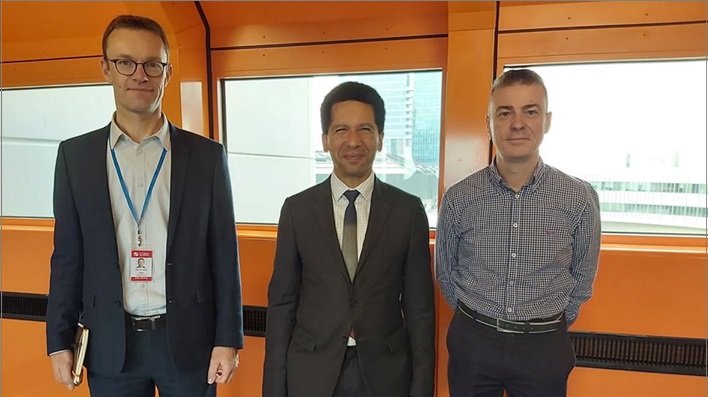