The Comprehensive nuclear Test Ban Treaty (CTBT) is today, with the Non Proliferation Treaty (NPT), one of the pillars of the global architecture for the non proliferation of nuclear weapons and in favour of disarmament.

Negociated between 1994 and 1996, then open for signature on 24 September 1996, the CTBT has been signed by 184 States and ratified by 168 of them (situation on 1st April 2020). For the Treaty entry into force, the negociators have defined a list of countries with nuclear capabilities which ratification is compulsory (whatever the number of States that would have already ratified the Treaty). These States are called Annex II States. On 1st April 2020, eight States belonging to the Annex II have not yet ratified the Treaty : Iran, the United States of America, China, Israel, Egypt, India, Pakistan and North Korea, these last three countries having also to first sign the Treaty. It is also only these last three States that have carried out nuclear tests since 1998 (India and Pakistan in 1998, the Democratic People’s Republic of Korea in 2006, 2009, 2013, 2016 and 2017).

Established in Vienna in 1997, the Provisionnal Technical Secretariat of the Preparatory Commission of the Comprehensive Nuclear Test Ban Treaty Organization is in charge to prepare the entry into force of the Treaty through development and deployment of techniques necessary to monitoring and verification of any form of nuclear explosion in the world. 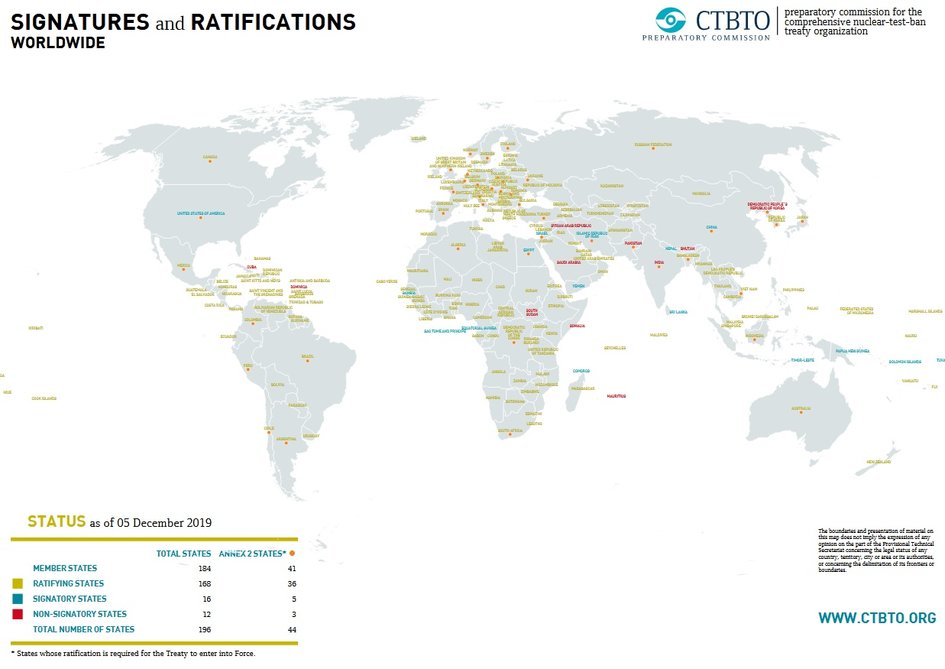 The goals of the Treaty are defined by the following articles :

2. Each State Party undertakes, furthermore, to refrain from causing, encouraging, or in any way participating in the carrying out of any nuclear weapon test explosion or any other nuclear explosion. »

Different techniques can be found among the global framework of the CTBT verification regime, based on four pillars :

The International Monitoring System functionning, the technologies used and the French contribution to this system are introduced in the dedicated article "Around the world in 16 stations".