Angela Me is currently the Chief of the Research and Trend Analysis Branch in the United Nations Office on Drugs and Crime. She started her UN carrier as junior professional officer. After 24 years she has achieved what she considered the most challenging and interesting UN post. She has two children and a husband who always supported her career and its related geographical moves even when he had to re-adjust his own career as a physicist. She has worked with managers who gave her trust and confidence and helped her to grow within the organization but she has also worked with people who have resisted her leadership.

1. What are the specificities of your career as a woman at the United Nations? What particular difficulties have you encountered as a woman?

At some critical moments in my career, I had the luck to have opportunities. I started at the United Nations as a JPO. Having first been trained as a statistician in a small Italian town, I have to thank the Italian government for trusting my abilities. The recruitment process was very transparent and the fact that I was a woman was not a problem since they were essentially looking for statisticians, regardless of their gender.

When I joined UNFPA (United Nations Population Fund), I had just completed a PhD in statistics. The work at UNFPA was process-oriented, so it was not a place where, with my background, I could grow and flourish. One of my bosses encouraged me to move to the statistical division of UNSD/DESA (editor’s note: United Nations Statistics Division; United Nations Department of Economic and Social Affairs) in New York, which lacked statisticians. This shift from one organization to the other was supported by the Italian government, which considered a priority for the JPO programme to help the experts. This flexibility helped me to find the right place for my UN career.

At the UN Statistics Division I had the right technical profile and expertise to grow (although working in a niche area in the UN can be disadvantageous). I also found there a manager who believed on my capacities. I worked directly under the supervision of the Director of the Division who exposed me to a great variety of activities and to high-level interlocutors in New York and at the United Nations. I found in the Director a person who gave me great opportunities and although I was rather junior he trusted me with rather visible and strategic tasks. He gave me the opportunity to make mistakes and learn from them. To my credit, I took all the opportunities he gave me and I worked very hard to succeed. As a junior staff I didn’t feel any particular difficulties and didn’t face obstacles in relation to my gender. The challenges started later, when I moved up in scale. Junior women are not considered a threat until they want to move into positions of responsibility.

2. How can we promote women’s access to positions of responsibility? What have you carried out to achieve this within your organization?

First, there are institutional efforts to be made. We need to identify promising young women and promote them in the organization, give them opportunities. Promoting women also involves the promotion of an inclusive culture and a culture where collaborative values are appreciated and encouraged. It is the responsibility of the hierarchy and managers to change the culture of the organization and the meaning of professional success, to include criteria which move away from typically masculine competitive and territorial attitude and promote more inclusive competencies such as cooperation and teamwork. Today, the dominant male characteristics define what it means to be a good manager, which facilitates men’s access to management positions. Male dominated organizations are more likely to promote men, or to promote women who resemble the male attitude toward management. . Many men in power today have learned the rhetoric of gender equality and have accepted (sometimes with some reluctance) some of the measures to achieve equality (such as recruitment of women in higher positions), but fundamentally few have embraced the paradigm of gender equality. Many male mangers still feel more comfortable to share power only with other men and resent women who exercise authority and leadership (particularly over men). These stereotypes are unconsciously normalized in some men (and women) behaviors that there is no recognition of the need for change.

For example, at UNODC, the peculiar funding model which is based on project funding, has created a culture where success is perceived primarily in terms of size of the portfolio that managers are able to collect. This has created a very competitive environment where a culture of cooperation and appreciation of diversity has become harder to reach. Promoting different success criteria helps to enhance partnership which value the different elements that each person, man or woman can bring to successfully deliver the mandate of the organization. There is a lot that women can do too. First women should support other women to have self-confidence and balance their family life and their career. But it is also necessary to project models of women leaders who don’t deny themselves. Most women are convinced that they must adopt a "masculine" logic to reach positions of power. Promoting successful managerial feminine-style help women to change the stereotypes and gives them confidence that they can succeed as women, without having to prove or change anything.

3. What are the issues involved in combining personal and professional life in your organization? How can a better balance be encouraged on this point?

The balance between work and family life is a very complicated issue, especially when you have children. In balancing work and family, I am not a good role model. I have had two children and I struggled a lot when they were small. I always felt a great sense of responsibility for my work and have sometimes put it before my role as mother. While today my children tell me that they are happy for my choices, it has been a great struggle for me when they were growing up. I believe I didn’t want to miss a single opportunity and have tried “to have it all” paying a very high physical and emotional price. I hope that the new generation of women will not have to go through this struggle and that society (work environments, family cultures, ..) can help them to find a better equilibrium.

As a manager today, I want my employees to be happy and fulfilled, including in their personal lives. I am quite demanding from my staff and I confess that sometimes I have to force myself not to expect others to sacrifice themselves as I did. In general, I am in favor of allowing staff (not only women) to use all the measures we have at UNODC on flexible working arrangement. Although it is sometimes difficult to find a balance to be fair with everyone. While the majority of those who use these arrangements need them and properly use them, there is always a minority who take advantage of this flexibility not to perform. 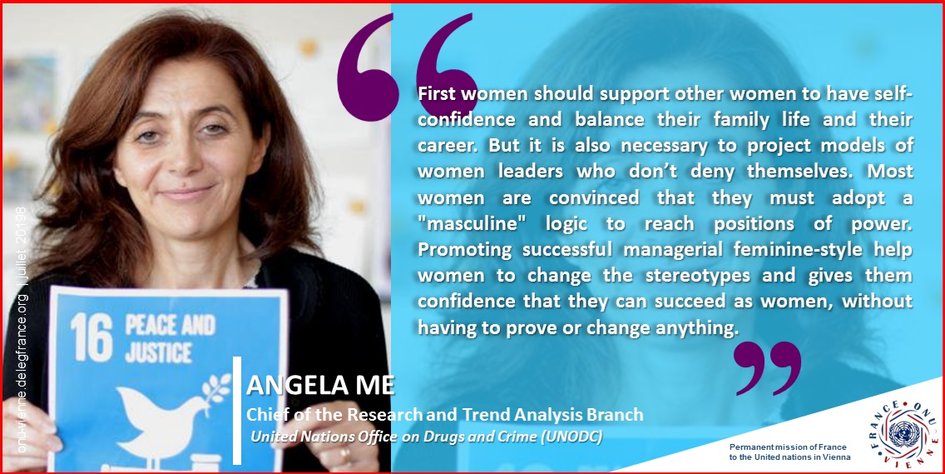 4. How do you see the evolution of the place of women in your scientific fields?

In statistics, and more generally in science, women suffer a particular disadvantage. We indeed expect women to study psychology, sociology and men to study physics or engineering. When I was a young girl in Italy, I wanted to go to a technical high school, the same where my brother went, but my math teacher discouraged me in front of my whole class, because that school was attended predominantly by boys. So I went to the “scientific” high school, something considered more proper for a girl who liked math. Today’s dynamics are constantly changing in favor of women. We certainly see more women in research, but they are not necessarily among the most influential. There are many young female researchers, but the most visible and renowned are still men. This can be explained by social and cultural factors: the fact that men are more likely to have the attitude of the know-it-all, and the attitude of women, who tend to be more discreet and invisible. Some women for example are less aggressive in pushing publications in scientific journals.

5. What would you suggest to improve the position of women in international organizations?

The turning point remains the moment when women begin to have children, especially at the UN. Women tend to give priority to their families, while it is easier for men to trade their families for their careers. Therefore, while at P2-P3 level, men and women are equal, the situation changes at a higher level of the hierarchy. Women network helps to support women in these situations. Women’s solidarity is essential because while men tend to promote themselves, women are sometimes more reluctant to do so. Coaching women also help them to gain confidence in accessing higher positions.

6. The United Nations has launched the "gender champions" initiative, whose representatives have committed not to participate in exclusively male panels. Have you ever refused to attend a panel composed exclusively of men, or been the only woman on a panel?

Having mixed panels is important but it is not enough. We must ensure that women take the floor and participate actively in the debates and that they have the same effective speaking time. I can bring two examples where being a woman I believe made a difference. Every two years I participate in an international conference on crime statistics. There is always an opening panel with a minister. For the four conferences I have attended I have always been part of the opening panel as the only woman and as the only person who doesn’t speak. I wonder if a man would accept the role of the “doll” in the same way.

Another example relates to timing. I recently attended a large meeting with the law enforcement community in an external organization. The panel included four speakers: two men and two women. The two men exceeded their speaking time, but were not stopped. Both men didn’t get questions from the floor so the chair nicely asks them a couple of questions. Me and the other woman, when reminded that time was about to end, we stopped to respect the time. No questions from the floor and no questions from the chair. Were we both so boring as compared to the two men?