Like many States, France did not take part in the negotiations of this instrument unsuited to the international security context and to which France does not intend to become a party. In accordance with its obligations under the NPT, France remains determined to pursue the next concrete steps towards nuclear disarmament, giving priority to the entry into force of the CTBT and the negotiation of an FMCT. 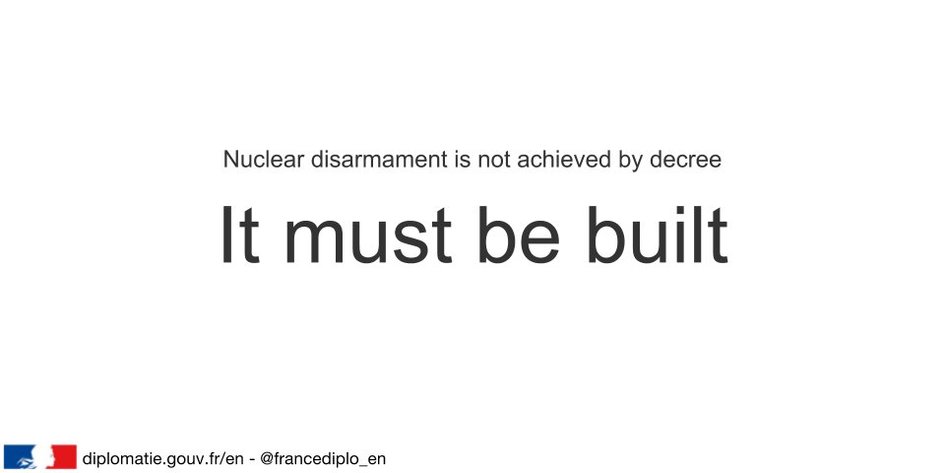 Statement from the spokeswoman of the Ministry for Europe and Foreign Affairs (Paris, 7 July 2017)

A treaty banning nuclear weapons was adopted in New York on 7 July.

It is a text unsuited to the international security context, characterized by growing tensions and the proliferation of weapons of mass destruction, as shown, inter alia, by the North Korea nuclear threat. France did not take part in the negotiations for this treaty and does not intend to become a party to it. The treaty does not bind us and does not create new obligations. The decision of a large number of states – nuclear weapon states and other states possessing or not possessing nuclear weapons – not to participate in the negotiations, in Europe and Asia in particular, cogently illustrates this disparity.

France’s security and defence policy, just like those of the allies and other close partners, is based on nuclear deterrence. Deterrence aims to protect our country from any state-led aggression against its vital interests, of whatever origin and in whatever form. The international situation permits no weakness. In this respect, a treaty banning nuclear weapons risks affecting the security of the Euro-Atlantic region and international stability. The treaty is also likely to undermine the Treaty on the Non-Proliferation of Nuclear Weapons, the cornerstone of the non-proliferation regime.

Nuclear disarmament is not achieved by decree, it must be built. France, for its part, remains determined to implement the next concrete stages in nuclear disarmament, in accordance with its commitments under the Treaty on the Non-Proliferation of Nuclear Weapons.

The next priority steps in nuclear disarmament are the negotiation of a treaty banning the production of fissile material for the manufacture of nuclear weapons (FMCT), and the prompt entry into force of the Comprehensive Nuclear-Test-Ban Treaty (CTBT). The reduction of Russian and American nuclear arsenals, which account for 90% of the world’s nuclear weapons stockpile, is another important goal.

France has already taken concrete, substantial nuclear disarmament measures, in particular by halving its nuclear arsenal, stopping nuclear tests, ratifying the Comprehensive Nuclear-Test-Ban Treaty and irreversibly closing its facilities which produce fissile material for nuclear weapons. We shall also continue our efforts to promote international security and stability, including when it comes to combating the proliferation of weapons of mass destruction./.

Joint Press Statement from the Permanent Representatives to the United Nations of the United States, United Kingdom and France following the adoption of a treaty banning nuclear weapons

France, the United Kingdom and the United States have not taken part in the negotiation of the treaty on the prohibition of nuclear weapons. We do not intend to sign, ratify or ever become party to it. Therefore, there will be no change in the legal obligations on our countries with respect to nuclear weapons. For example, we would not accept any claim that this treaty reflects or in any way contributes to the development of customary international law. Importantly, other states possessing nuclear weapons and almost all other states relying on nuclear deterrence have also not taken part in the negotiations.

This initiative clearly disregards the realities of the international security environment. Accession to the ban treaty is incompatible with the policy of nuclear deterrence, which has been essential to keeping the peace in Europe and North Asia for over 70 years. A purported ban on nuclear weapons that does not address the security concerns that continue to make nuclear deterrence necessary cannot result in the elimination of a single nuclear weapon and will not enhance any country’s security, nor international peace and security. It will do the exact opposite by creating even more divisions at a time when the world needs to remain united in the face of growing threats, including those from the DPRK’s ongoing proliferation efforts. This treaty offers no solution to the grave threat posed by North Korea’s nuclear program, nor does it address other security challenges that make nuclear deterrence necessary. A ban treaty also risks undermining the existing international security architecture which contributes to the maintenance of international peace and security.

We reiterate in this regard our continued commitment to the Treaty on the Non-Proliferation of Nuclear Weapons (NPT) and reaffirm our determination to safeguard and further promote its authority, universality and effectiveness. Working towards the shared goal of nuclear disarmament and general and complete disarmament must be done in a way that promotes international peace and security, and strategic stability, based on the principle of increased and undiminished security for all.

We all share a common responsibility to protect and strengthen our collective security system in order to further promote international peace, stability and security.

France and nuclear disarmament (on the webite FranceTNP)