Home > Nuclear Security : the commitment of France and of the International (...)

Nuclear Security : the commitment of France and of the International Community

In the statement delivered on behalf of France, the General Administrator of the CEA recalled the commitment of France to nuclear security, as proven by its active participation to summits organized on this topic, its support to the implementation of the 1540 resolution of the Security Council aiming at preventing the acquisition of radioactive sources par terrorist groups. He also underlined the central role of the IAEA, whose Member States adopted a Ministerial Declaration drawing the main orientations for the years to come. 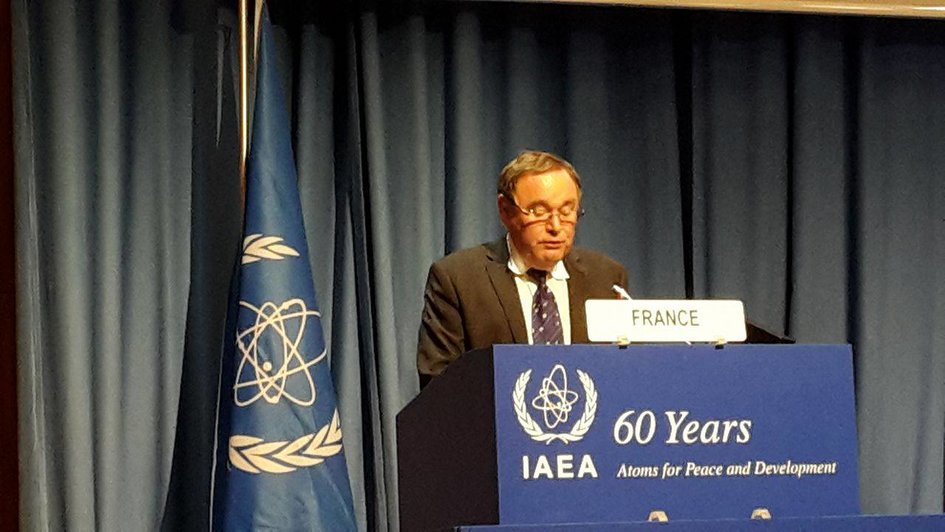 During the International Conference on Nuclear Security : Commitments and actions, that takes place in Vienna from 5th 9th December, the first 2 days are dedicated to a Ministerial segment. Daniel Verwaerde, General Administrator of the Commissariat à l’Énergie Atomiquue (CEA, French Atomic Energy Commission), head of the French delegation, made a statement this Monday on behalf of France.

Having recalled the importance of the nuclear security summits, along with the commitment of France in the Security Council in order to strengthen actions in this field, for example through the 1540 resolution, adopted in 2004, the General Administrator underlined the “central role of the IAEA in the coordination of international efforts in favor of nuclear security ». France welcomes the recent entry into force of the amendment to the Convention on the Physical Protection of Nuclear Materials (CPPNM) and will work for the « universalization of the pertinent legal instruments ». Mr. Verwaerde also recalled the commitment of France to the security of radioactive sources, among others through its support to the Code of Conduct on the safety and security of radioactive sources, adopted in 2004, and also through the tabling, during the 71st session of the United Nations General Assembly, of a resolution on this topic. France also co-chairs, along with the United States of America, the working group on alternative technologies to high activity radioactive sources. 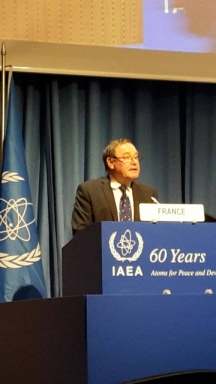 The General Administrator called to « the approval by the Board of Governors [of the IAEA] and the quick publication of the supplementary orientations on disused radioactive sources”. France reaffirmed its support to the actions of the IAEA in the field of nuclear security, through its assistance in the securing of international events, the support to capacity building or the support to IAEA peer reviews, e.g. IPPAS missions. Finally, the General Administrator underlined « the quality of cooperation inside the IAEA in the field of nuclear security [that] lies on non politicization of the works carried out there on a technical level, works that are essential to meet the goals that are at stake. (…) The respect of the role and jurisdiction of several interantional organizations and the responsability of each State is crucial to maintain a dynamic in favour of the reinforcement of the nuclear security ».

The video recording of the full statement delivered by Daniel Verwaerde is here.

In the middle of the afternoon, Ministers and Minister delegates signed a ministerial declaration. This text, adopted by consensus and who had been long discussed in Vienna, allows the strengthening of the IAEA commitment and actions in the field of Nuclear Security and draws the main goals and targets for the IAEA activities, for the upcoming years.