Home > News and statements > Archives > English > 2019 archives > Iran – Extraordinary session of the IAEA Board of Governors and joint (...)

An extraordinary session of the IAEA Board of Governors took place to discuss about Iran on 7 November 2019. Moreover, the IAEA published a report on 11 November which led to a joint statement by France, the United Kingdom, Germany and the EU High Representative. 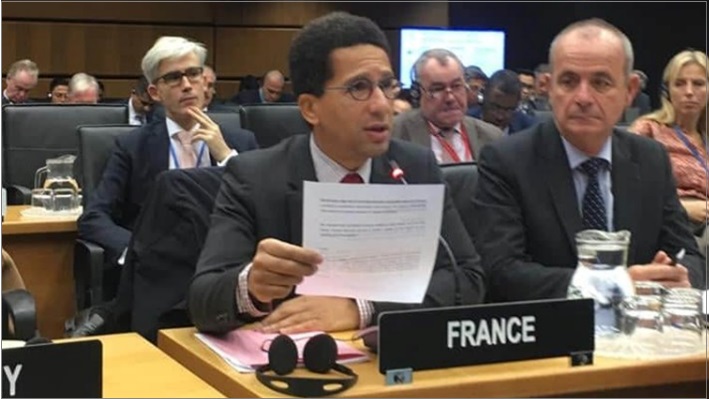 Extraordinary session of the IAEA Board of Governors

The Board of Governors of the International Atomic Energy Agency gathered in Vienna during an extraordinary session on 7 November to discuss about Iran.

During this session, several States and regional groups took the floor. Ambassador Xavier Sticker, Permanent Representative of France, delivered a joint statement on behalf of France, Germany and the United Kingdom, encouraging Iran to fully and swiftly cooperate with the IAEA, according ti the framework of its safeguards agreement.

Joint statement by France, Germany, the United Kingdom and the EU High Representative

After the extraordinary session of the IAEA Board of Governors, as mentioned above, a report dealing with Iran activities. This publication led to a joint statement by France, Germany, the United Kingdom and the EH High Representative.

« The Foreign Ministers of France, Germany and the United Kingdom and the High Representative of the European Union are extremely concerned by the latest announcements that Iran is restarting uranium enrichment activities at the Fordow facility, as confirmed by the International Atomic Energy Agency (IAEA) in its 11 November report.

Iran’s action is inconsistent with the JCPoA’s clear provisions on Fordow and has potentially severe proliferation implications. It represents a regrettable acceleration of Iran’s disengagement from commitments under the JCPoA. We urge Iran to reverse all measures inconsistent with the JCPoA, including exceeding the maximum allowed low enriched uranium stockpile and the maximum allowed enrichment limits, and not respecting the limits set by the JCPoA on nuclear R&D activities. The IAEA has confirmed in its latest reports, including in its latest quarterly report of 11 November that Iran is carrying out all of these measures.

We underline the importance of the full and effective implementation of the JCPoA by all sides and confirm our determination to continue all efforts to preserve the agreement, which is in the interests of all. Iran must return to full implementation of its commitments under the JCPoA without delay. We also call upon Iran to fully co-operate with the IAEA within the framework of the JCPoA and in accordance with all its nuclear obligations, in particular its Comprehensive Safeguards Agreement and the Additional Protocol. In this regard, we are deeply concerned by the lack of timely co-operation by Iran and by the recent incident reported to the Board of Governors at its extraordinary meeting on 7 November.

We reiterate our support for the IAEA and recall our confidence in the Agency’s impartial and independent monitoring and verification of Iran’s nuclear commitments.

We affirm our readiness to consider all mechanisms in the JCPoA, including the dispute resolution mechanism, to resolve the issues related to Iran’s implementation of its JCPoA commitments. We are in contact with the other JCPoA participants in this regard.

The E3/EU have fully upheld their JCPoA commitments, including sanctions-lifting as foreseen under the JCPoA. It is now critical that Iran upholds its JCPoA commitments and works with all JCPoA participants to de-escalate tensions. We stand ready to continue our diplomatic efforts to create the conditions for, and to facilitate, the de-escalation of tensions in the Middle East, in the interest of preserving international peace and security. These efforts are however made increasingly difficult by Iran’s latest actions.»