On 29 August is celebrated the International day against Nuclear Tests. Since its decision to completely stop nuclear test on 29 January 1996, France has ratified the Comprehensive nuclear Test Ban Treaty, completely dismantled its testing site and is fully committed for the entry into force of the Treaty.

On 2 December 2009, the 64th session of the United Nations General Assembly declared 29 August the International Day against Nuclear Tests by unanimously adopting resolution 64/35. The resolution calls for increasing public awareness “about the effects of nuclear weapon test explosions or any other nuclear explosions and the need for their cessation as one of the means of achieving the goal of a nuclear-weapon-free world.” The resolution was initiated by the Republic of Kazakhstan, together with a large number of sponsors and cosponsors with a view to commemorating the closure of the Semipalatinsk Nuclear Test site on 29 August 1991.

The Day is meant to galvanize the United Nations, Member States, intergovernmental and non-governmental organizations, academic institutions and the media to inform, educate and advocate the necessity of banning nuclear weapon tests for a safer world. Since its establishment, many bilateral and multilateral governmental level developments as well as broad movements in civil society have helped to advance the cause of banning nuclear tests.

Every effort needs to be made to ensure the entry into force of the CTBT and to preserve its place in the international architecture. In this regard, the Secretary-General appeals to all remaining States whose ratifications are required for the Comprehensive Nuclear-Test-Ban Treaty to enter into force to commit to sign the Treaty promptly.

"The Comprehensive Nuclear-Test-Ban Treaty has an essential role within the nuclear disarmament and non-proliferation regime. It fosters international peace and security by constraining the development of nuclear weapons. Our collective security demands that every effort should be made to bring this essential treaty into force." — UN Secretary-General, António Guterres 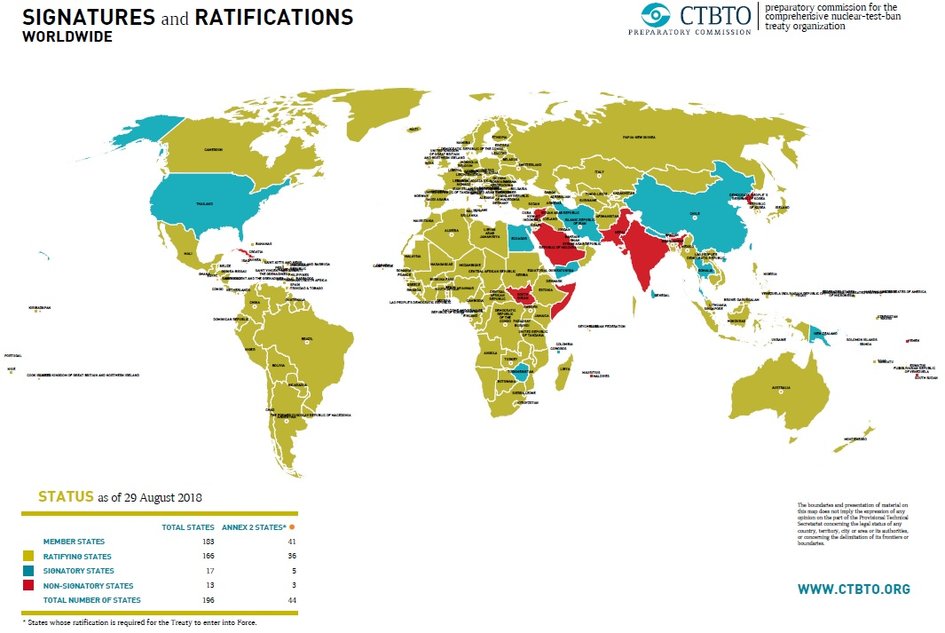 France recalls the urgency and the importance to ban all nuclear explosions as stated in the Comprehensive nuclear Test Ban Treaty (CTBT).

France is the very first Nuclear Weapon State, along with the United Kingdom, to have signed the in 1996 and ratified in 1998 the CTBT. France is committed for the complete ban of nuclear tests, which is one of our first priorities in favor of nuclear disarmament. France calls on all States that have not yet signed or ratified the CTBT to do it promptly, in order to contribute to international peace and security, as recalled in the United Nations Security Council resolution 2310, adopted on 23 September 2016->https://www.un.org/press/en/2016/sc12530.doc.htm]. France is actively engaged in favor of nuclear disarmament: