"Research centres of the French Alternative Energies and Atomic Energy Commission (CEA) will make their research reactors and other facilities available to institutions from IAEA Member States for education, and joint research and development (R&D) projects, Daniel Verwaerde, CEA’s Administrator General announced on the 15th of September 2015. 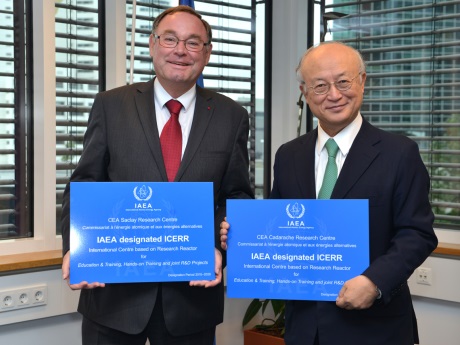 As the first designated International Centre based on Research Reactors (ICERR) under a new scheme launched by the IAEA last year, CEA’s research centres in Saclay and Cadarache will become international research hubs.

“Such centres will enable researchers from IAEA Member States, especially developing states, to gain access to research reactor capabilities and develop human resources efficiently, effectively, and, probably, at a lower cost,” Mr Amano said at a ceremony at IAEA Headquarters in Vienna, during which he awarded the designation to the CEA.

This support is made visibile by the creation of an international scientific community, resources and infrastructure being made available, as well as the establishment of a platform for nuclear training based on practical learning.

According to the IAEA, the designation was the result of a rigorous process, including the review of the application and support documentation, an audit mission performed at the CEA sites, as well as a comprehensive evaluation and recommendation by an international selection committee made up of representatives from the global research reactor community and IAEA staff. The goal of the scheme is to help Member States, mainly without research reactors, to gain timely access to research reactor infrastructure to carry out nuclear research and development and build capacity among their scientists with regard to national objectives.

France plans to welcome 15 to 20 researchers at its centres per year."