France statement to the 61st general conference of the IAEA

Daniel Verwaerde, General Administrator of the CEA and Head of the French Delegation, delivered a statement on behalf of France at the 61st session of the General Conference of the AIEA, that takes place in Vienna from 18 till 22 September 2017. 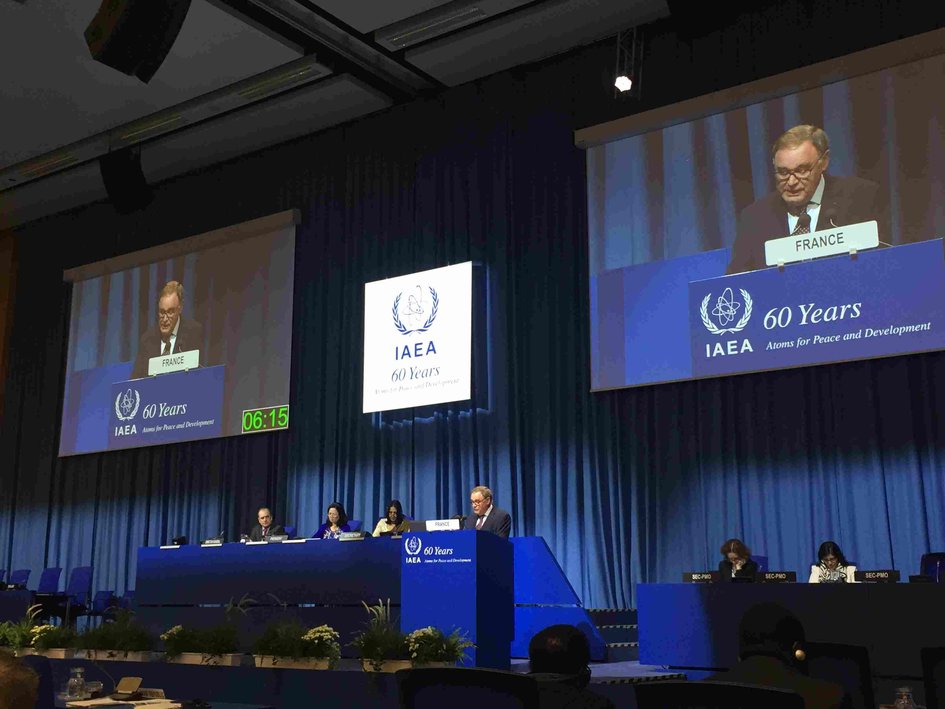 On Tuesday 19 September 2017, during the plenary session of the 61 st General Conference of the IAEA, Daniel Verwaerde delivered the following statement :

Madam Chair, Allow me to congratulate you on your election as President of this 61st session of the General Conference. You can count on the full cooperation of the French delegation in this task.

I also wish to congratulate the Director General, M. Amano, for his re-election, and welcome Granada as a new member of our Agency. France fully associates itself with the statement made by Estonia on behalf of the European Union, of which it holds the presidency for this six-month period.

Madam Chair, I would like to start by underlining France’s commitment to the essential role of the IAEA and our appreciation for the quality of the work it provides in furthering all of its missions: non-proliferation, nuclear safety and security, and promotion of the many peaceful uses of nuclear energy.

The role of the Agency is especially fundamental in the implementation of the Non-Proliferation Treaty. This is an extremely valuable edifice for our security and for strategic stability, which must be preserved and consolidated. As such, France reiterates its appeal to all Member States to conclude with the Agency a comprehensive safeguards agreement and an additional protocol. Only these two instruments in combination can provide sufficient guarantees of the absence of undeclared nuclear activities or materials.

I am pleased to be able to announce in this context that France, EURATOM and the IAEA have gone ahead, on the sidelines of the last Board of Governors, with the signature of the amendments modifying the Protocols annexed to their safeguards agreement under the Treaty of Tlatelolco.

The current strategic context, characterized by increasing tensions, can only strengthen our commitment to the international non-proliferation regime. In this regard, and without entering into a substantive debate, which is not appropriate here, I wish to underline that the recently adopted Treaty on prohibition of nuclear weapons undermines the NPT as the cornerstone of the non-proliferation regime, as well as the IAEA safeguards system. France will not sign it.

Madam Chair, The continuation of North Korea’s nuclear and ballistic programme, in violation of international law and the non-proliferation regime, poses a threat to regional and international security. France condemns the sixth test which this country carried out on September 3.

We must rigorously apply the sanctions decided by the UN Security Council, transposed by all States. We must be united and strengthen pressure on the North Korean regime to return to the negotiating table, understand that escalating tensions is not in its interest, and accept to work towards complete, irreversible and verifiable dismantling of its nuclear programme.

Madam Chair, The Vienna agreement on Iran’s nuclear programme is an essential element of the current non-proliferation regime, which France is determined to preserve. There is indeed no alternative to this agreement. This has to be clear. All the Iranian nuclear commitments must be implemented in a rigorous and transparent manner, on a sustained basis. The parties to the negotiations have a special responsibility in this regard. The role of the IAEA is also essential. France commends and reiterates its support for the work done by the Agency for its precise monitoring of all JCPOA sections.

Madam Chair, I wish to reaffirm the absolute priority that France places on the establishment of the highest levels of non-proliferation, nuclear safety and nuclear security throughout the world. The IAEA has a central role to play in achieving this objective, which conditions the future of nuclear energy, while respecting the primary responsibility of States. In these two distinct but complementary areas of nuclear safety and security, France welcomes the results achieved by the IAEA in 2017 safety. France will continue to provide its support, both technical and financial.

Madam Chair, Whatever the scenarios adopted, all projections show that nuclear energy will remain an important component of the global energy mix. The Agency is the privileged forum for organizing cooperation between the Member States interested in its development. France is itself convinced that nuclear energy, a carbon free energy, has an important contribution to make in resolving the challenges of our time, the fight against climate change, through the implementation of the Paris Climate Agreement and the Sustainable Development Goals.

As you know, we have undertaken a major restructuring of the French nuclear industrial sector. This process initiated in 2015 has now entered its final stage. The merger of EDF’s and AREVA NP’s activities in the design, project management and marketing of new reactors will be effective by the end of the year. AREVA, for its part, has refocused on fuel cycle activities with the creation of a new entity "NEW AREVA HOLDING" and a recapitalization in which new Japanese strategic partners are involved.

Madam Chair, Beyond the energy issues, France remains fully committed, alongside the IAEA, to all the peaceful applications of the atom. As such, it remains one of the main contributors to the Technical Cooperation Fund. It also hosts a very significant number - approximately 5% each year - of IAEA trainees and scientific visitors.

Madam Chair, The achievement of the IAEA’s objectives is the work of all, but, in particular, of the Secretariat, its Director General and all its staff. May they be warmly thanked. France has every confidence in the Agency’s ability to fulfil its missions. France will once again be by its side this year. Thank you