Home > News and statements > France, candidate to the Commission on Narcotic Drugs

France, candidate to the Commission on Narcotic Drugs

France is candidate to the elections that will take place on 19 April 2017 at ECOSOC with a view to designation the members of the Commission on Narcotic Drugs (CND) for the period 2018-2021. It promotes comprehensive and balanced drug policies based on supply and demand reduction, international cooperation and respect of human rights. Learn more about this candidacy in English, French Spanish and Arabic. 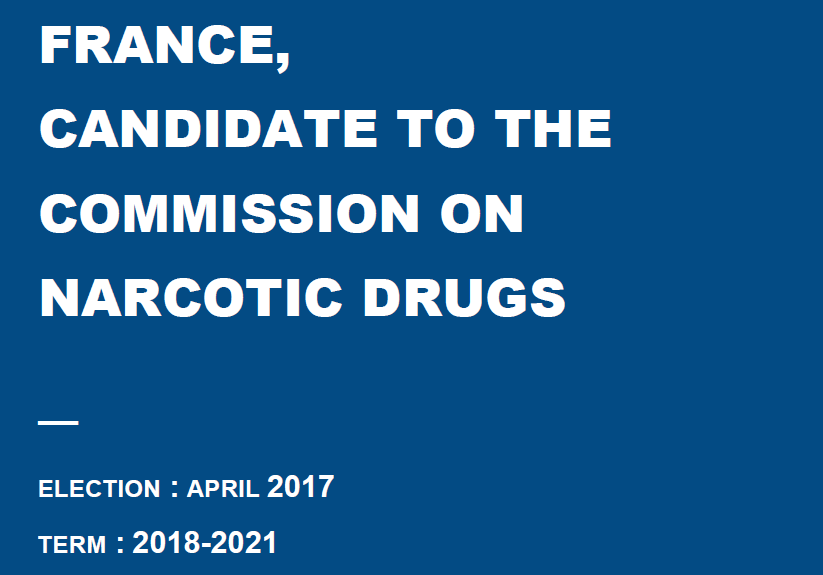 The Commission on Narcotic Drugs is a functional commission of the Economic and Social Council of the United Nations (ECOSOC) whose mission is to ensure the implementation of international agreements on drug control. With the exception of the 2008-2010 term, France has been a continuous member of this Commission since it was established in 1946. Elections for membership of the CND for the period 2018-2021 will take place on 19 April 2017.

An active and experienced member of the CND

During its current CND mandate, France has placed prevention at the heart of the debates on the world drug problem by:

The strong international mobilization for prevention and our initiatives in this field clearly demonstrate the role France can play in promoting comprehensive and balanced policies based on scientific evidence that can bring together a large number of States.

At the forefront of the international community’s mobilization : Together against trafficking and organized crime

International cooperation based on shared responsability

2018-2021: Striving for a closer international cooperation with a particular focus on: