A regional expert meeting on « capacity building for institutions with an aim to improving cooperation in penal justice to dismantle illegal cash flows resulting from migrant trafficking in countries of South-Eastern Europe” was held in Belgrade from 16th to 18th November 2016.

This meeting was organised by the United Nations Office on Drugs and Crime (UNODC), the French Ministry of Foreign Affairs and the Serbian Ministry of Interior. 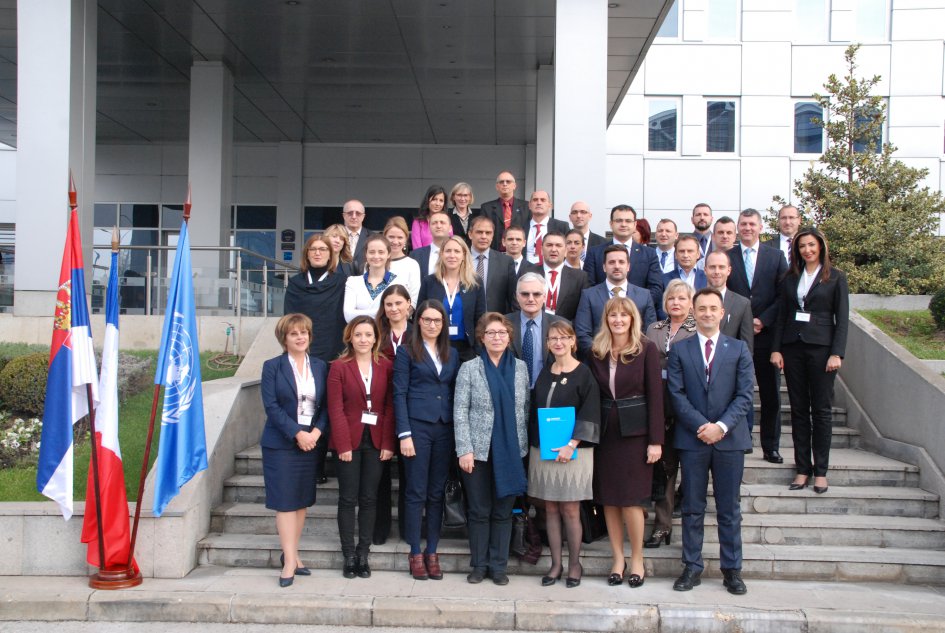 The French Ambassador to Serbia, Her Excellency Madame Christine Moro, opened the meeting alongside the regional UN representative, Irena Vojackova Sollorano and Mitar Djuraskovic, head of department on clandestine migration and human trafficking at the Serbian Ministry of Interior.

45 participants from 13 transit and destination states in South-Eastern Europe participated, including Greece and Turkey, to form an expert group comprised of police, justice and finance ministries, banking institutions, civil society, NGOs and academics, all of which are involved in the fight against migrant trafficking and money laundering resulting from this criminal activity in South-eastern Europe.

The group’s activities were driven by three representatives of UNODC as well as Pierre Bellet, liaison magistrate in Belgrade and Caroline Charpentier, Regional Technical Advisor "Fight against Human Trafficking in South-eastern Europe" and related crime from the Permanent Mission of France to the United Nations in Vienna, Austria.

This meeting represented an opportunity to provide technical assistance to affected States in their efforts to dismantle transnational smuggling networks, while protecting migrants’ rights. This assistance was aimed at building capacity for States and reinforcing interaction, information and intelligence networks, including evidence-sharing systems, as well as cooperation amongst them.

Participants examined the challenges faced regarding the question of migrant trafficking, best practices exchange concerning joint investigation teams, with a view to improving transnational legal and police cooperation along this road.