In the margin of the 74th United Nations General Assemnly, the CTBT ratifying States gathered on the occasion of the 11th conference to facilitate the entry into force of the Treaty. Mr. Jean-Yves Le Drian took the floor to recall the full support of France to the Treaty since its creation.

While negotiating the Comprehensive Nuclear Test Ban Treaty (CTBT), drafters agreed that ratifying States could gather, every other year, in order to consider progress made regarding the entry into force of the Treaty. This is described under article XIV of the Treaty, which gave birth the “Article XIV Conference”. On 25 September 2019, in the margin of the 74th United Nations General Assembly (UNGA), the 11th edition of the Article XIV Conference took place, co-chaired by Germany represented by its Minister for Foreign Affairs, Mr. Heiko MAAS and Algeria represented by its Minister of Foreign Affairs, Mr. Sabri Boudakoum. France was represented by the Minister for Europe and Foreign Affairs, Mr. Jean-Yves Le Drian, while France was also one of the six vice-president of the Conference.

Adoption of a joint declaration

Several speeches were delivered at the opening of the Conference. Ms Nakamitsu (U.N. undersecretary-general and high representative for disarmament affairs), delivered a statement in the name of the United Nations Secretary General and then gave the floor to Mr. Tijjani Muhammad-Bande, President of the United Nations General Assembly. Then Belgium and Irak took the floor, as conclusions of their co-chairmanship of the Xth Article XIV Conference (2017-2019) in order to officially pass the presidency to Algeria and Germany.

The 168 ratifying States have adopted, by consensus, a declaration in favor of the entry into force of the Treaty, to which several States Signatories accepted to co-sponsor. While commending the progress made since 2017 toward the universalization of the Treaty, the speakers recalled the need for eight States of the Annex II of the Treaty, which have not yet ratified the CTBT, to do it as soon as possible. They especially underlined the necessary ratification by North Korea, which is the only country to have conducted nuclear tests in the XXIst century. While the entry into force is still pending, States supported the development of the CTBT verification regime, which is built on an International Monitoring System that will eventually have 321 stations and on the International data Center (IDC) based in Vienna, on the preparing of the On-Site Inspections (OSI) which could be launched once the treaty has entered into force, if a clandestine nuclear test was suspected.

Echoing the numerous Ministers for Foreign Affairs that took the floor during the Conference, Mr. Jean-Yves Le Drian, delivered our national statement, in addition to the one delivered by Ms. Federica Mogherini, High Representative of the European Union for Foreign Affairs and Security Policy, Vice-President of the Commission His speech was the occasion to recall the commitment of France towards the CTBT, since its creation while being one of the very first State, especially within Nuclear Weapon States, to ratify it, but also through its permanent support to the deployment of the CTBT verification regime, the building and operation of the IMS stations under its responsibility. The Minister also recalled the importance for Farnce to the swift entry into force of the Treaty. 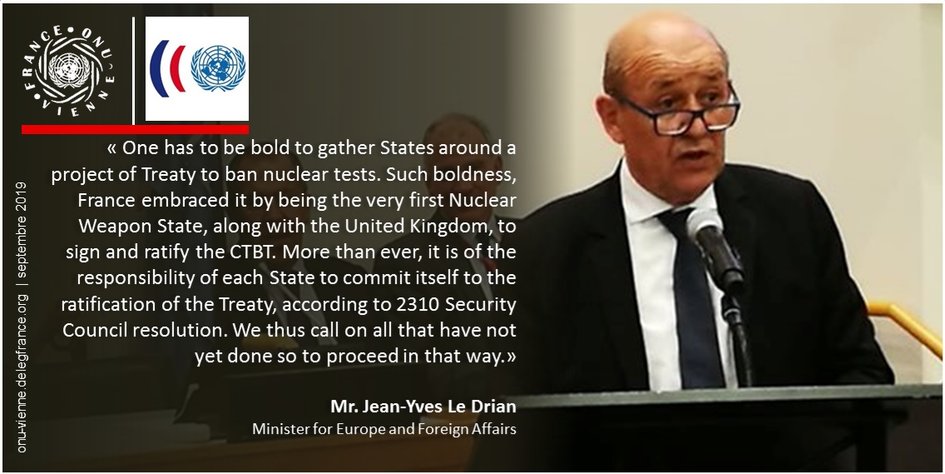