Home > News and statements > Statements > CTBTO: beginning of the operational test phase of the SPALAX-NG

CTBTO: beginning of the operational test phase of the SPALAX-NG

Profiting from more than 12 years of operation of the SPALAX system (among other example, in the context of the6 DPRK nuclear tests or the Fukushima crisis), France launched, in 2012, as other countries did, the development of the 2nd generation of station. The SPALAX-NG (as in New Generation) system represents a ground breaking evolution.

Figure 1. Conclusion of the pre-certification visit.

Open for signature and ratification since 1996, the Comprehensive Nuclear Test Ban (CTBT) is supported with the International Monitoring System (IMS) as its verification tool. This network, composed of more than 300 measurement stations throughout the world is able to detect and analyze all the relevant observables that might be released as a consequence of a nuclear test: seismic data, infrasound and hydro acoustic measurements and atmospheric radioactivity..

Two types of atmospheric radioactivity can reveal the conduct of a clandestine nuclear test : the presence of airborne element marked with specific artificial radionuclides, and the presence of xenon radioactive isotopes (133Xe, 133mXe, 131mXe, 135Xe). Contrary to airborne particles, noble gas are highly valued markers for they can escape out of a buried cavity more easily.

Measuring radioxenon : the development of the SPALAX system At the beginning of the years 2000, when the IMS was developed, the detection and measurement of the activity of atmospheric radioactive xenon was a major challenge: the « natural » background level of radioactive xenon in the atmosphere is quite unknown (in particular the origin of this background) and all available technologies to detect nuclear signatures of pertinent radioisotopes are yet basic and not suitable for on field measurements. Nevertheless, thanks to major efforts in research and development, three detection systems have appeared. They provide the possibility for atmospheric sampling, sample purification, xenon concentration and finally the measurement of emitted radiation as relevant isotopes are disintegrated. These systems are the SAUNA (from Swedish design), the ARIX (from Russian design) and the SPALAX (designed in France by the CEA). Such devices work 24/7 with sampling and measurement cycles of 12h or 24h. within a few years, a network composed of 40 stations has been built on the basis of these devices. At the moment, in the IMS, there are 16, 11 and 3 operating SAUNA, SPALAX and ARIS stations, respectively. I. The very first SPALAX station was installed in Tahiti, in 2002. 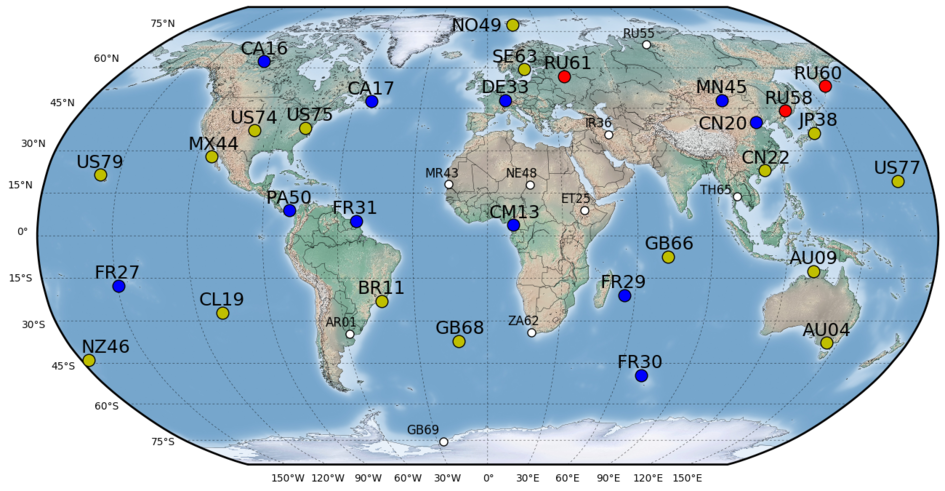 Benefiting from more than 12 years of operation of the SPALAX system (especially in the context of the 6 DPRK nuclear tests or the Fukushima accident), France along with other countries, engaged in 2012 in developing the second generation of measurement device. The new system, called SPALAX NG (New Generation) , is an unprecedented step forward in the detection technology. From scratch, highly ambitious requirements have been set. They were the following : significantly increase the sensitivity of the detection system (by increasing the volume of gas sampled, and by optimizing the efficiency of the measurement, especially regarding unstable xenon isotopes), to increase the selectivity of the system (in order to reduce the influence of radon, a radioactive noble gas that is naturally present in the atmosphere), to reduce the sampling cycle length (in order to improve the localization capabilities of emitting points), to increase the data availability, to constrain the electricity consumption and to limit the costs.

[SPALAX-NG] Nearly 5 years of research and development have been needed to answer all of these stakes and assemble the very first prototype, in cooperation with Cegelec-Defense. From the very beginning, in opposition with other available systems, the designers have made the ambitious bet of “100% high resolution” detection device. In addition to a Germanium based gamma spectrometry device, an electron detector has been developed in partnership with Canberara/mirion.Based on Silicium technology (named « PIPSBOX ») this system allows the detection and the high resolution analysis of the electrons emitted by xenon radioisotopes. Functioning together, “by coincidence”, this two signals allow the detection of very low level information. The sensitivity of the measurement is then highly improved, while the detection of as low concentration as only hundreds of xenon radioactive atoms per m3 is now made possible. Thanks to the choice of high resolution detection, analysis of .spectral data are easier to carry out with mathematical schemes (for without interference) and unambiguous (limited risk of « positive fake ). The SPALAX-NG can also operate in gamm/X mode, such as the first generation SPAALX could. This is a major advantage for data analysis, for the system availability in the case of malfunction on the electron data acquisition and to assure a large measurement dynamic. In this line, dedicated software has been developed for the high resolution data analysis. Based on a strict mathematical process, this enables to deal with a high volume of data that is part of high resolution acquisition.. Finally, comparing with the first generation SPALAX, the Xenon volume produce has been tripled and the detection limit, for the xenon metastable isotopes, has been reduced by more than one order of magnitude. Such an improvement would reveal crucial for interpreting information in the days following a potential nuclear test.

The qualification process carried out with CTBTO experts

In order to prepare the deployment of the SPAALX NG throughout the IMS network, it is compulsory to prove to all States Signatories that this device is, on the long term, compliant with all the technical specifications requirements. IN that line, two CTBTO experts have carried out a pre-certification visit in the CEA facility, from 24 till 27 September 2018. Following this visit, an operating phase has started on 1st October. The device will be operated 24/7 for 6 months, in France, under the responsibility of the CEA ; it will be thereafter be deployed in Ottawa (Canada) for 6 additional months of 24/7 operation by Health Canada. The produced data are transferred live to the International Data Center (IDC) of the Provisional Technical Secretariat (PTS) in Vienna, for analysis and evaluation.

Figure 4. Presentation of the system during the pre-certification visit (Background : the energy module and the monitoring part of the SPALAX-NG). 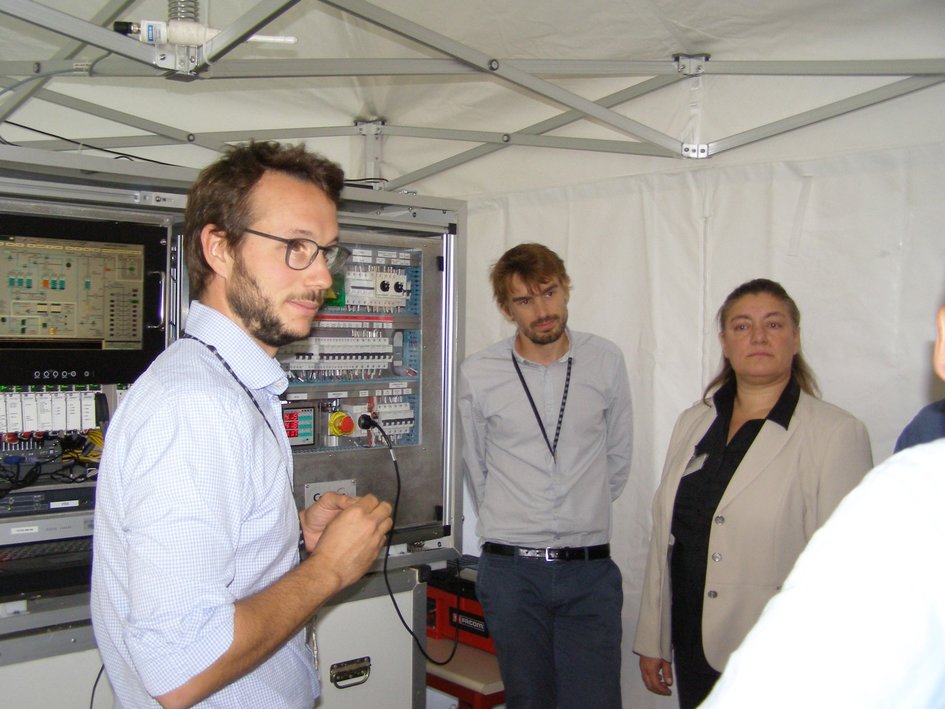 At the end of the extended test period, the SPALAX is aiming to get its homologatio in order to be deployed on the IMS. A presentation of the first months of operation will be made during the next Science & Technology Conference (Vienna, June 2019).

Figure 5. Presentation of the system during the pre-certification visit (Background : purification module of the SPALAX-NG). 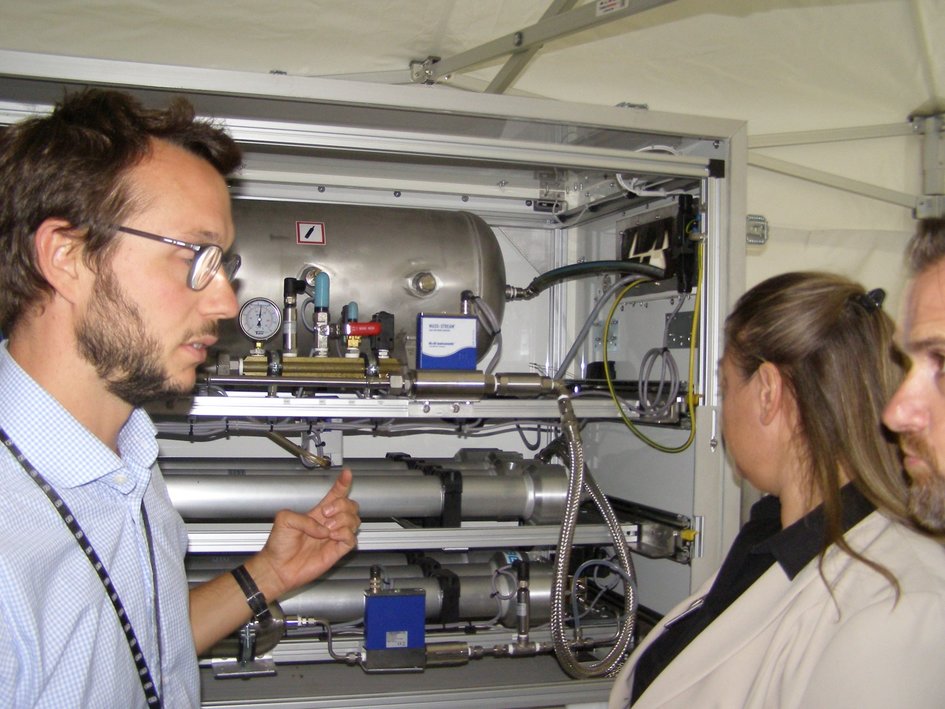