The Comprehensive nuclear Test Ban Treaty (CTBT) is today, along with the Treaty on the Non Proliferation of Nuclear Weapons (NPT), one of the pillars of the world architecture on the non-proliferation of nuclear weapons.

French support to the CTBT

France is actively supporting the entry into force of the Comprehensive nuclear Test Ban Treaty.

Seeking peace, France is committed to a disarmament approach, which furthers global stability and security. France has a unique track record in the world, in keeping with its responsibilities and interests, having dismantled irreversibly its land-based nuclear component, its nuclear test facilities, its fissile material for weapons production facilities, and having reduced the size of its arsenal, which is currently under 300 nuclear weapons. These decisions are in line with our rejecting any type of arms race and our keeping the format for our nuclear deterrent at a level of strict sufficiency.

This exemplary track record gives France the legitimacy to call for other nuclear powers to make tangible gestures towards comprehensive, progressive, credible and verifiable disarmament.

As regards nuclear disarmament, I call on all States to join us in supporting a simple agenda, under Article VI of the NPT, [including] the safeguarding and universalization of the Comprehensive Nuclear-Test-Ban Treaty. We’re committed to it.

France was among the very first States to sign the Treaty in September 1996 and to ratify – as early as April 1998 – this tool aiming at prohibiting all nuclear test explosions. The French nuclear test site, in the Pacific ocean, has thus been irreversibly dismantled in 1998, in a transparent way and opendness to the International Community. France is the one and only nuclear power to have taken such a commitment. 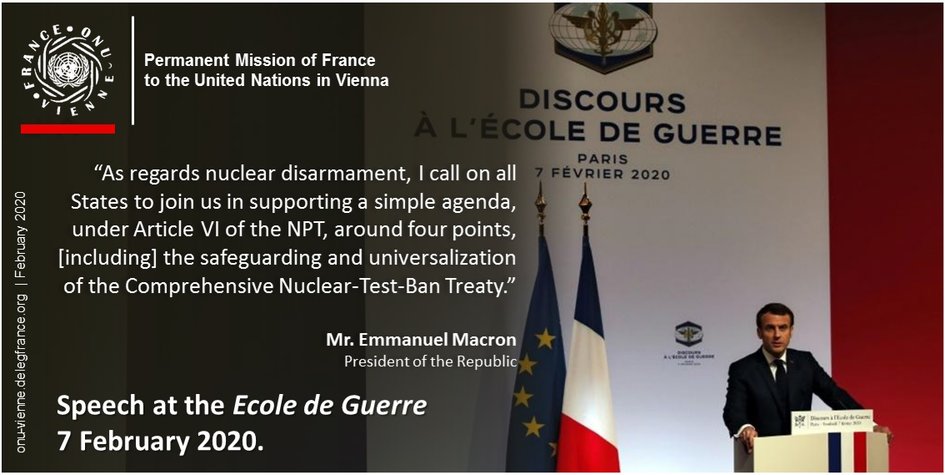 The CTBT entry into force is part of a larger approach in favor of a global and comprehensive disarmamaent under a strict and efficient verification, as defined in the article VI of the Treaty on the Non proliferation of nuclear weapons (NPT). France is commited to promoting the reduction of arsenals in the world, from a quantitve point of view and to limit their qualitative improvements, and to fight against the proliferation of weapons of mass destruction, including nuclear weapons, and their means of delivery. Moreover, France calls on the universalization of this efforts on an international level.

French experts, especially from the French Alternative Energies and Atomic Energy Commission (CEA) and from the Ministry of Defence, actively participate to the construction of the verification regime, especially for all the technical contribution to acquire data, to analyze it and to process it. French experts take part to workshops, discussions during policy making organ meetings, conferences and also during bilateral meetings. 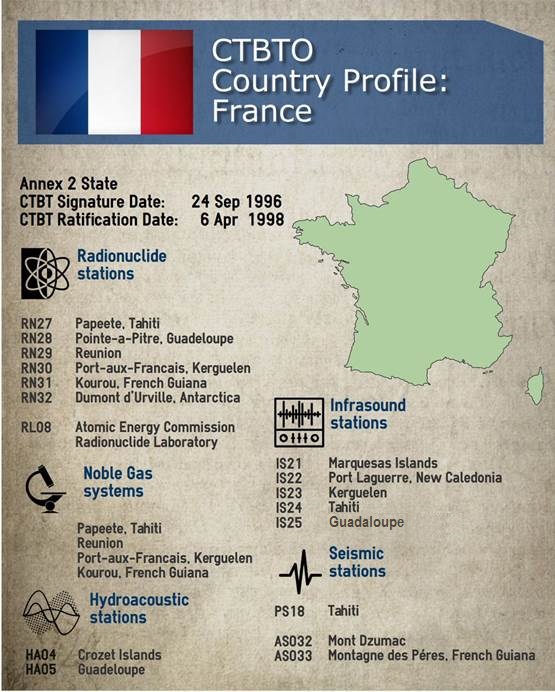