Home > News and statements > CTBTO : Around the world in 16 stations

CTBTO : Around the world in 16 stations

In line with the ratification of the Comprehensive nuclear Test Ban Treaty, France installed sixteen surveillance stations (seismic, hydroacoustic, infrasound and radionuclides stations) that fully take part to the International Monitoring System (IMS). Discover these stations with their technical facts, from the Antarctica to Paris through French Polynesia. 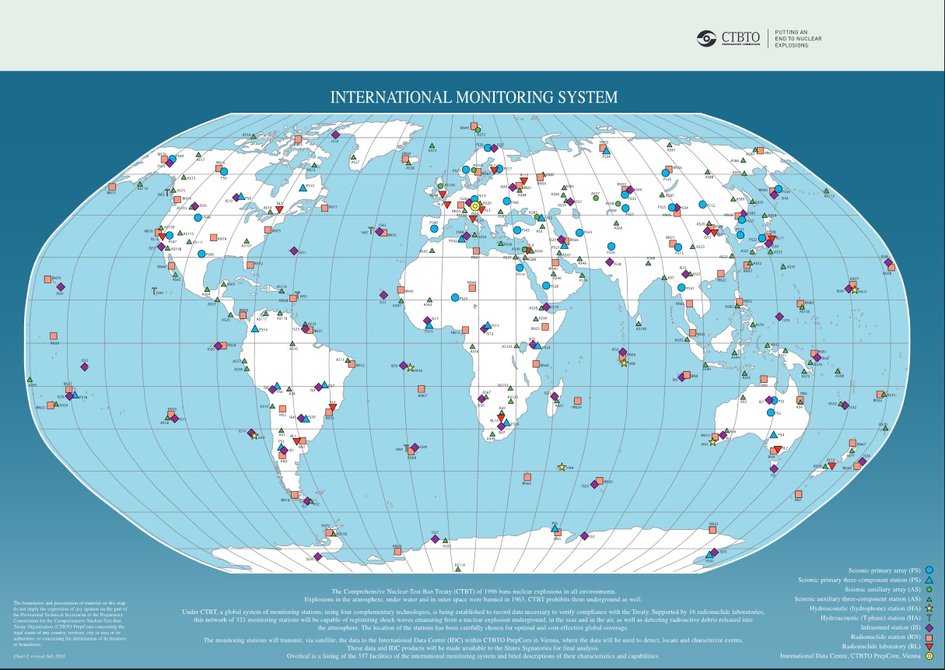 France and the International Monitoring System

On 6th April 1998, France ratified the Comprehensive nuclear Test Ban Treaty. Along with the commitment not to conduct any more nuclear test, France committed itself to put into place, on his national territory, sixteen stations whose characteristics and localization have been defined with the CTBTO and the States signatory. These sixteen French stations are part of the 321 stations of the International Monitoring System (IMS), as defined by the Treaty, and whose deployment aims at assuring the detection of any nuclear test.

This system has been able to detect and analyse the latest events that occured in North Korea in the last years and to provide States signatory with the necessary technical data.

The recordings of these stations are transmitted live to the International Data Centre (IDC) in Vienna (Austria) that is in charge of their analysis. The goal of the IMS is to be able to surely detect any nuclear explosion with an energy above 1 kiloton (1 000 tonnes) of TNT-equivalent, whatever the location of the explosion in the globe, under the ground, in the atmosphere or in the oceans.

Around the world in 16 stations : the French station profiles

You will find here the technical data of the sixteen stations that have been installed by France according to its ratification of the Comprehensive nuclear Test Ban Treaty.

The French radionuclides stations are equipped with the SPALAX detector that has been designed and developed by the CEA/DAM. 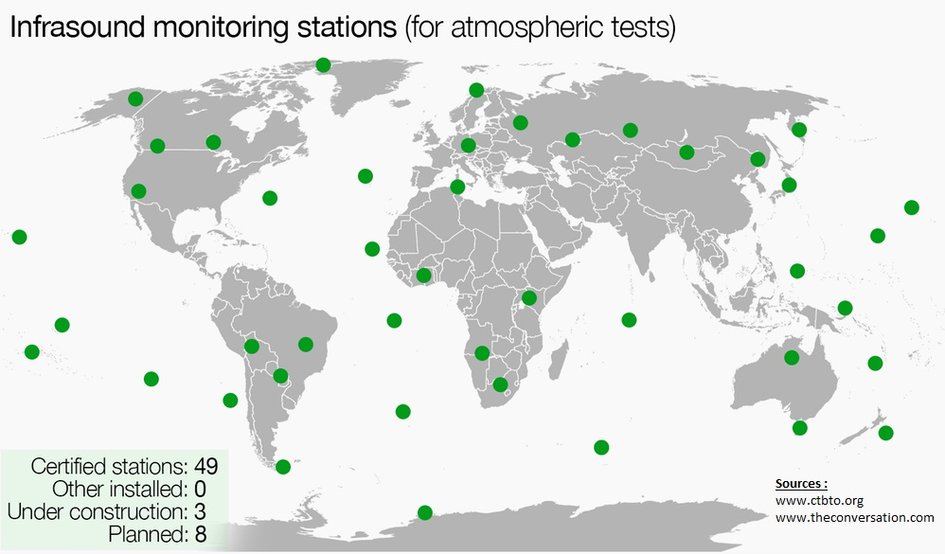 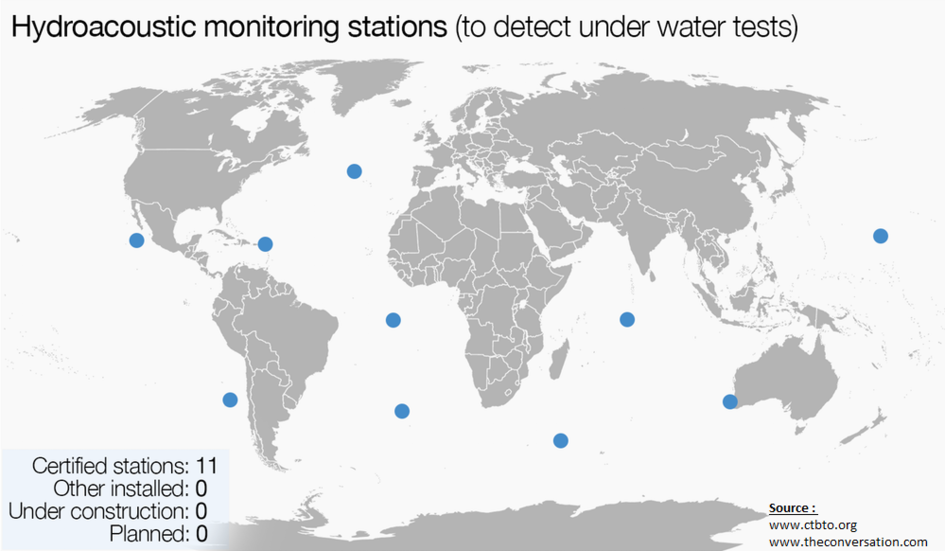 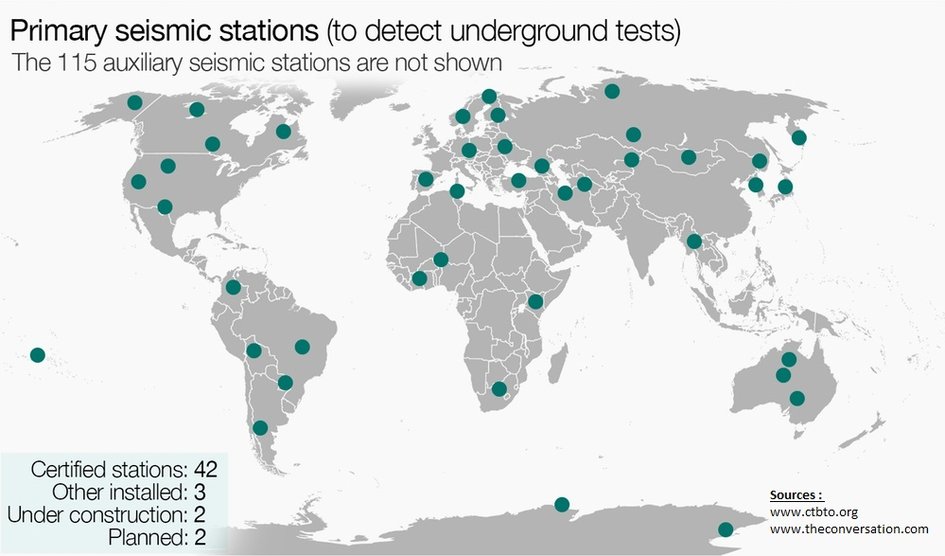 How to detect a nuclear test?

Underground nuclear tests create seismic waves similar to those in an earthquake. They can therefore be detected by seismometers. .

—  Several methods can be used to detect a nuclear test. It all depends of the nature of the test : underground, open-air or under water.

Why? To monitor the earth for underground nuclear explosions.

How? Seismic stations are equipped with seismic sensors or seismometers to measure waves generated by seismic events (for example earthquakes or explosions) that travel through the Earth. Measurements taken at seismic stations help identify the location, strength and nature of a seismic event.

Why? To monitor the oceans for underwater explosions.

Where? At 11 stations – six underwater hydrophone stations ; five T-phase stations on land – in eight countries around the world.

When Hydroacoustic stations transmit data 24 hours a day, 7 days a week in real time via satellite to the International Data Centre (IDC) in Vienna, Austria.

Why? To monitor the Earth mainly for atmospheric nuclear explosions.

Localisation At 60 IMS stations in 35 countries around the world.

How? Infrasonic sensors measure micropressure changes in the atmosphere which are generated by the propagation of infrasonic waves. These very low frequency waves can also be created by atmospheric nuclear explosions.

When? Infrasound stations relay data continuously 24 hours a day and seven days a week in real time to the International Data Centre (IDC) in Vienna. Once received, data are analysed and data products are transmitted via satellite to the CTBTO Member States.

Why? To detect radioactive particles and noble gases (i.e. xenon) in the atmosphere.

How? Airborne particles are captured for analysis to identify the radioactive elements, or radionuclides, contained in them. In a different process, air is sampled to detect the radioactive noble gas Xenon content. Specific radionuclides provide unambiguous evidence of a nuclear explosion.