CTBT States Signatory gathered to prepare the work of the November session of the Preparatory Commission. The Working Group A is specifically in charge of preparing decisions on administrative and financial topics.

The working Group A gather on 28 and 29 October for its 56th session, to prepare the decisions that will officially be taken in the November PrepCom by States Signatories. Under the chairmanship of Ambassador Krueger, permanent representative of Namibia, the Working Group A session has been opened with a speech delivered by the CTBTO Executive Secretary, Dr. Lassina Zerbo, in which he recalled the main achievements reached by the Provisional Technical Secretariat (PTS) in the last 6 months. In addition to eh announcement made by Cuba of its willingness to join the CTBT, he underlined the importance of the Article XIV Conference that took place in New York on 25 September and during which a ministerial declaration was adopted to support the entry into force of the Treaty.

The States Signatories mainly discussed on the draft budget proposal for 2020-2021 which will be formally adopted in November 2019. In its statement, France recalled its support to the entry into force of the Treaty and underlined, as the discussion for the upcoming budget are now entering their final stage, the importance that all States Signatory should pay their assessed contribution and this as soon possible within the year. 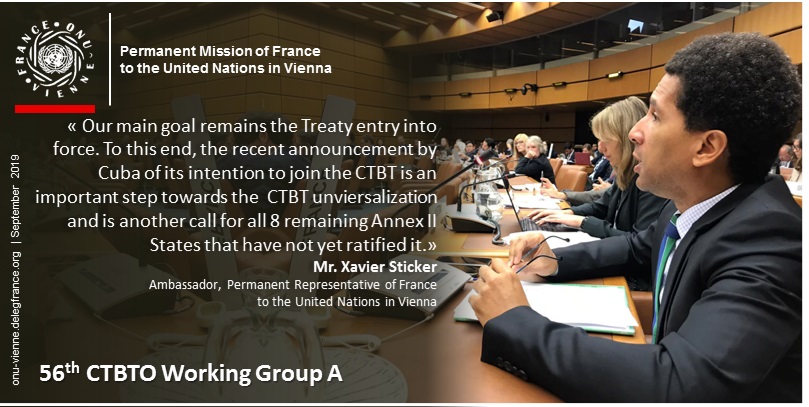