The Working Group B of the Comprehensive Test Ban Treaty Organisation (CTBTO), a subsidiary body dedicated to technical and scientific issues along with programs of the organisation, took place in Vienna from 12 till 23 March 2018. The technical experts from the 183 States Signatories are invited to discuss, with the Provisional Technical Secretariat, on the progress made in the establishment of the verification regime in the past 6 months.

The CTBTO Working Group B

The CTBTO Working Group B is a subsidiary body of the Preparatory Commission specifically in charge of the scientific and technical issues and of the programs that are directly linked to the implementation and the requirements of the Treaty. This Working Group B, which gathers experts coming from the 183 States Signatories, is called every 6 months in Vienna for two weeks. It makes an overview of the main actions carried out in line with the International Monitoring System during the last semester, observes the progress made for its implementation along with the implementation of the International Data Centre (IDC) and offer the States Signatories the possibility to discuss on technical progresses made by the Provisional Technical Secretariat, alone or in collaboration with States Signatories. During the sessions, thematic meetings are organized around tasks that aim at implementing the requirements of the treaty.

Overview for the 2nd semester 2017

ON the occasion of the Working Group B, the STP introduces an overview of the IMS implementation: number of installed stations, number of certified stations, etc. with a view to reach as soon as possible the goal identified by the Treaty (321 surveillance stations and 16 laboratories for radionuclides analysis). The availability of these stations, the conformity of the data transfer along with the incidents and measures taken to solve them, in close collaboration with States Signatories, is also introduced. According to the terms of the Treaty, IMS stations belong to the States that host them and that have the responsibility of their operation and of the transfer of measure data to the CTBTO. These stations are completed by auxiliary stations, paid on voluntary extra budgetary contributions by CTBTO States Signatories (for example through UE contributions). France, on a national level but also at the service of several States Signatories, is responsible for the operation of around 30 IMS stations, which makes France one of the most important IMS operators. From July till December 2017, the operation of stations under the French responsibility has been fully in agreement with the requirements of the treaty:

During the 2nd semester of 2017, the FRL08 laboratory, located in the facilities of the Commissariat à l’énergie atomique et aux énergies alternatives (CEA), in Bruyères-le-châtel, has been certified by the CTBTO experts. This certification for noble gas analysis allows the FRL08 laboratory to join the three other certified laboratories in the US, in Great-Britain and in Austria (Seibersdorf, CTBTO).

All these topics are discussed during meetings organised between the French experts that are part of the delegation and the teams of the CTBTO Provisional Technical Secretariat and during the « Expert group meeting » that take place during the entire Working Group B period. Through these discussions, in addition to the validation of previous CTBTO activities, it is possible to build a roadmap for the CTBTO technical activities for the upcoming months. The overall activities done during the two weeks are summarized in a report, adopted by consensus by all participating States Signatories. This report can identify some recommendations of the States Signatories that will be transfer to the next Preparatory Commission session. 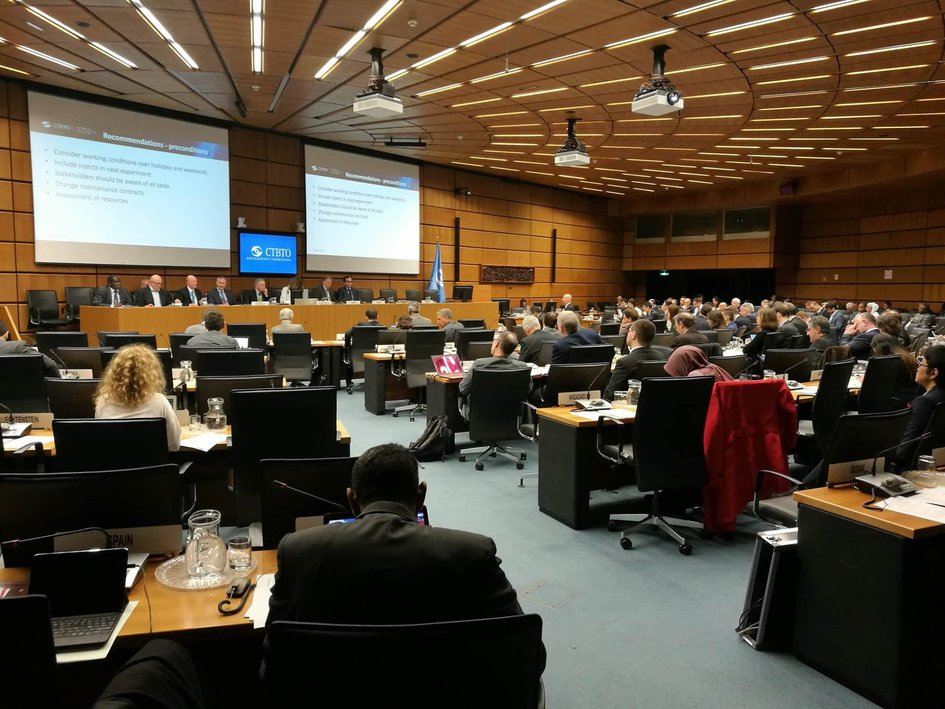