All you need to know about Rio+20

The UN Conference on Sustainable Development is being held in Rio de Janeiro from 20 to 22 June 2012, 20 years after the first Earth Summit, which had marked a turning point in the consideration of environmental challenges at the international level. It helped foster the recognition of an integrated approach to sustainable development and the fight against poverty, in particular its social and environmental aspects. Climate change, decline in biodiversity, soil erosion and desertification, increased pollution… The international community must give itself the resources to meet these challenges by strengthening global governance of the environment, which is currently too fragmented and ineffective. This major global meeting on sustainable development is the opportunity to recreate the civic enthusiasm and political commitment sparked by the Earth Summit in 1992. To this end, France is mobilizing through all of its actors, whether they are public or private, come from civil society or are private citizens. This special international date is key for France and the European Union: First of all, "Rio+20" is a unique opportunity to carry the project of a world environmental organization (WEO); We are expecting a clear message from "Rio+20", promoting a green economy, concrete advances in terms of setting indicators, beyond GDP, to measure societies’ progress; The conference should also make it possible to give sustainable development the place it deserves within the United Nations, driving a reform of the Commission on Sustainable Development, and, if possible, of the Economic and Social Council; France will be mobilizing in anticipation of this conference, along with the entire European Union and the many developing countries that share these same concerns. 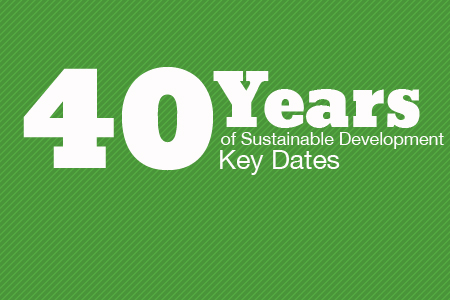 Here are the key dates relating the last 40 years of sustainable development:

The water and water treatment

The green industry and inclusive economy

The French Department of Foreign Affairs will be organizing side events during the Rio+20 Conference; here is the description of the side events:

Map of the French funding of sustainable development projects (in French): click here

Governance and climate change are based on the United Nations Framework Convention on Climate Change (UNFCCC) which was open for ratification in 1992, came into effect in 1994 and has been ratified by 190 countries. The thrust of the convention is based on the scientific findings of the Intergovernmental Panel on Climate Change(IPCC) which summarises the works of many scientists across the world. It published its 4th report in November 2007, which confirms the scenarios of aggravation of the situation and the need for urgent action. The climate convention was complemented by the Kyoto Protocol, which was adopted in 1997, came into effect in 2005, and has an implementation period covering 2008 to 2012. This imposes binding targets on industrialised countries for the reduction of greenhouse gas (GHG) emissions, by an average of 5.2% from 1990 to 2012. Targets are specified for each of them. This protocol has been ratified by 176 countries. The notable exception is the United States which signed but never ratified it. Australia ratified it in December 2007 and Turkey on 5 February 2009.

Negotiations on the future climate regime are taking place under the two-fold formal framework of the Convention and the Protocol, the Parties to which meet twice a year in parallel sessions: the meeting of subsidiary bodies of the Convention and Protocol, in Bonn (Germany) in June each year, and the conference of the parties to the Convention (COP) with the meeting of the parties to the Convention (MOP), in a different country every year in December. The last COP/MOP took place in Bali (Indonesia) in 2007, in Poznan (Poland) in 2008 and in Copenhagen (Denmark) in 2009. The next conference will take place in December 2010 in Cancun (Mexico) and the following one in December 2011 in South Africa.

The 13th Conference of the Parties on climate change (COP13) and the 3rd Meeting of the Parties to the Kyoto Protocol (MOP3), which were held in Bali from 3 to 15 December 2007, led to the adoption of an “actionplan” which introduces a negotiation process for the fight against climate change post-2012. One of the achievements of this action plan is the launch of a unified negotiation framework on the future climate regime post 2012 with the setting up of an action plan working group (or ad-hoc Group on long term cooperative action- AWG-LCA -), with a calendar of additional meetings, negotiated each year, based on the above-mentioned annual meetings. The objective of a global agreement on the future international regime post 2012 was initially planned to be defined during the COP15 of Copenhagen in December 2009. The final compromise reached in Bali concerned mainly the following two points:

recognition of the scientific findings of the IPCC, although no agreement was finalised on the target figures of reduction of global emissions in the long term (-50% in 2050) and of emissions in the medium term for industrialised countries (-25 to -40% by 2020);

recognition of the principle of “common but differentiated responsibilities” between developed countries and developing countries.

The COP14 (1-12 December 2008 in Poznan) fulfilled its main objectives, mid-way between Bali and Copenhagen, with the adoption of working programmes, for 2009, of the AWG-KP and the AWG-LCA. These should allow discussions on the future international climate change regime to enter into the negotiation phase in 2009. The overall tone of substantive discussions of the AWG-LCA was constructive even if few new proposals were put forward and little progress has been achieved. At the technical level, procedures for the implementation of the Adaptation Fund have been approved (it had been launched in Bali). The conference ended with the simultaneous adoption by the European Union of the “energy-climate package”, in anticipation of the EU commitments in this matter.

The Copenhagen Conference (COP15) was the exceptional event expected: a historical participation level (130 of the 192 countries of the climate convention were represented by their Head of State or government), an unprecedented number of participants (over 45 000 persons accredited), worldwide media coverage. Copenhagen was to be the result of the Bali action plan launched in 2007. Its objective was to unite the international community over the future climate change regime to be adopted at the end of 2012, when the Kyoto Protocol expires. This step has been crossed in a situation characterised by extreme tension and the conference nearly failing. For the first time, a majority of the international community embarked on the path of stabilising greenhouse gas emissions with approval of the objective of limiting the increase in temperatures to less than 2°C. The Copenhagen agreement, negotiated on 18 December 2009 by some thirty Heads of State and Government, is totally in keeping with the United Nations, even if its adoption by all Parties to the Conference boils down to a decision of “taking note”. The agreement therefore intends to go beyond a public declaration whereby Heads of State and of government express their willingness to commit themselves to the follow-up of the process and define their directions. Its real reach will depend on its formal adoption, in particular through implementing texts, namely future decisions of the next Conference of the Parties (COP16) in Cancun (Mexico) next December. The Copenhagen agreement has led to the following major progress, which until now were not recorded in any global text:

The objective of 2°C and the restatement of a global emission peak “at the earliest”;

The creation of a specific adaptation framework for the most vulnerable countries;

The recording of reduction targets for developed countries by 2020;

The recording of mitigation efforts by developing countries by 2020;

Guidance on the commitment monitoring system;

The setting up of a system for combating deforestation;

The setting up of financial resources to support mitigation efforts, with a commitment of 30 billion dollars for the period 2010-2012 (called “fast start”), a target of 100 billion dollars per year in 2020 for climate assistance in developing countries, and the creation of a climate fund;

The creation of a mechanism to speed up technology deployment;

Monitoring of the implementation of the agreement by 2015 with adjustment of targets, where necessary.