ACUNS 2016 : what role can the IAEA play for International Security ? 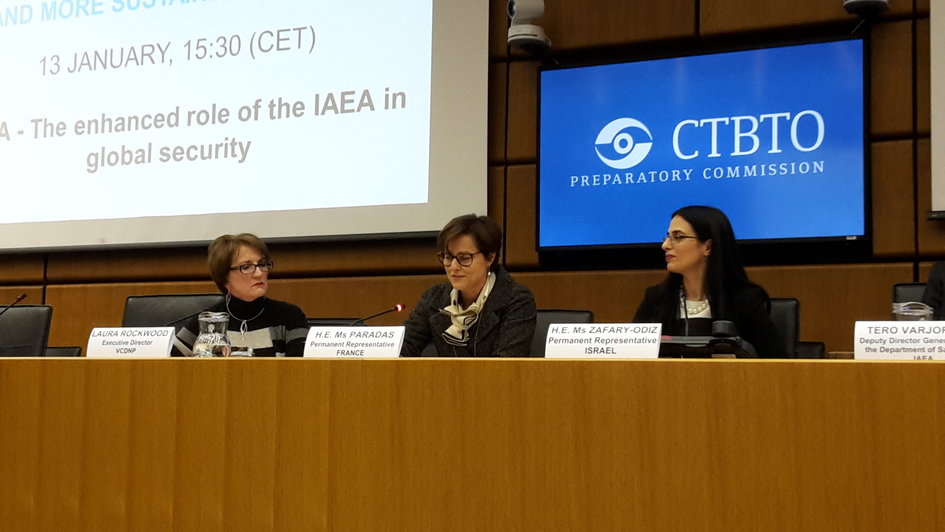 On the occasion of the annual Conference of the Academic Council of the United Nations System (ACUNS), the Ambassador, permanent representative Marion PARADAS took part to a panel discussion dedicated to the contribution of the International Atomic Energy Agency (IAEA) to preserve International Security. Her presentation, focused on the role of the IAEA in the implementation and monitoring of the Agreement of the 14th July 2015 between the E3+3 and Iran on the nuclear deal, emphasizes this major contribution of the Agency to non-proliferation of nuclear weapons and thus to regional and global peace and stability.

However, as some speakers mentioned during this panel discussion, the « global security » to which the IAEA contributes is not limited to non-proliferation of nuclear weapons, as important as this can be. The safety of operation of nuclear facilities, their security and their protection against malicious or terrorist acts, the secure providing of energy and the answer to the growing needs of nuclear applications for medical purposes or the role of nuclear technologies to improve the resilience of human societies facing climate change through food security, water resources management or study on soil erosion are many topics where the IAEA acts and that are relevant topics regarding this “global security” concept, in its wider acceptation.

The stakes are high, regarding international coordination enforcement to promote nuclear security, the response of the international community the 4th nuclear weapon test carried out by North Korea in January 2016, the new threats in the field of cybersecurity of nuclear facilities or even upcoming initiatives for non-proliferation and nuclear weapon disarmament, according to the questions raised by speakers and the audience.

A consensus nevertheless emerged on the central part that the IAEA is to play in order to benefit from this opportunities and to prevent the occurring of this threats.