In the margin of the 73rd United Nations General Assembly, the 6 States of the informal group called the « Friends of the CTBT » organized an event to support the entry into force of the Treaty and the action of the Provisional Technical Secretariat. On this occasion, a ministerial statement, which is co-sponsored by France, has been delivered.

Every other year, an event is organized in the margin of the United Nations General Assembly by the six States composing the informal group of the « Friends of the CTBT » : Germany, Australia, Canada, Finland, Japan and the Netherlands.

Based on a ministerial statement, delivered by the Ministers of Foreign Affairs from the Friends of the CTBT, the States Signatories are invited to join their voice in support of the entry into force of the Treaty as soon as possible, to recall the unanimous condemnation of nuclear tests including those from North Korea, and to welcome and support the work that has been done by the Provisional Technical Secretariat (PTS) and the Comprehensive Test Ban Treaty Organization for the past 20 years. This statement also recalled that, according to the goals defined by the Treaty on the nonproliferation of nuclear weapons (NPT), the CTBT contributes to nuclear disarmament and nonproliferation, by limiting the ability of nuclear weapon States to develop new weapons and by forbidding non-nuclear weapon States to carry out any nuclear test. The signature and ratification by France of the CTBT have been major contributions to the step by step approach of nuclear disarmament promoted by France.

The joint Statement that has been co-sponsored by France also mentioned the necessary commitments expected from North Korea, according to its recent declarations. A first concrete step would be to join the CTBT, the one and only legally binding tool to officially translate the nationally declared moratoria. The statement also underlined the importance of the International Monitoring System (IMS), deployed by the CTBTO in advance of the entry into force, and that is now achieved at 80%. Nevertheless, some stations do not function according to the requirements of the Treaty (some because of long time running technical challenges, some because of the political will of the Host State not to transfer any data from the station), which endangers the correct functioning of the IMS and, on a more long term, the treaty itself.

"The fact that the Treaty is not yet in force is deeply disturbing, and this situation must be rectified. We urge all States which have yet to sign or ratify the CTBT, in particular the eight remaining Annex 2 States, to do so without further delay. (…) The EU urges the DPRK to engage seriously in taking concrete steps to embark on a credible path towards a complete, verifiable and irreversible denuclearisation and adhere to its declared suspension of testing nuclear weapons and ballistic missiles. Until the DPRK does take these concrete steps towards denuclearisation, we will continue to strictly enforce existing sanctions.”

The Minister of Foreign Affairs of the Kingdom of Thailand took the floor, following the ratification of the CTBT by his country during the 73rd UNGA. 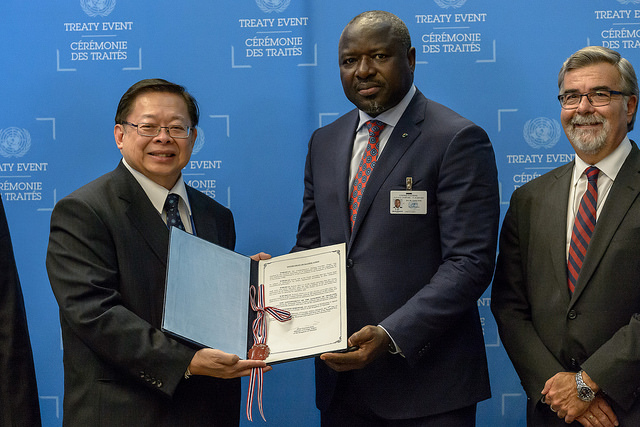 The complete event can be seen in the following video :