Since 2009, the 29th August is the United Nations day dedicated to the fight against nuclear tests and to promote the entry into force of the CTBT. On this occasion, several statements were delivered in New York. 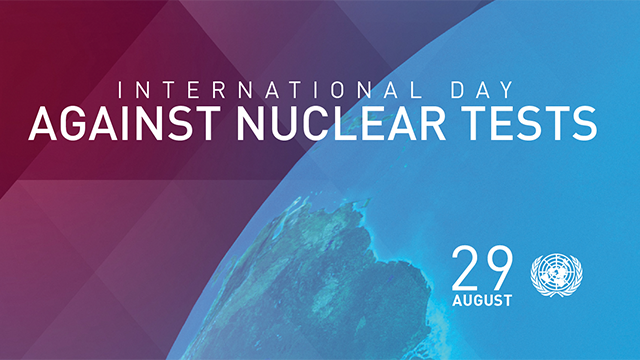 On 2nd December 2009, the United Nations General Assembly has proclaimed the 29th August to be the « International Day against Nuclear Tests » through the adoption of the 64/35 resolution. This resolution was initiated by the Republic of Kazakhstan and was supported by many countries, in order to commemorate the closing of the Semipalatinsk nuclear test site, on 29th August 1991. The 29th August is also an occasion to promote the Comprehensive Nuclear Test Ban Treaty and to call for its entry into force.

France was among the very first States to sign the Treaty in 1996 and to have ratified – as early as April 1998 – the Treaty aiming at banning any nuclear explosion. The nuclear test site in the Pacific was therefore irreversibly dismantled in 1998, in a transparent way and opened to the international community. To that day, France is the one and only nuclear weapon country to have made such a commitment.

France actively supports the entry into force of the Comprehensive Nuclear Test Ban Treaty. In its promotion of peace, France is very much attached to a disarmament approach at the service of security and international stability.

« Regarding nuclear disarmament, I call on all States to join [France] in the support of a clear agenda, according to the article VI of the NPT, especially for the preserving and universalisation of the Comprehensive Nuclear Test Ban Treaty. We are fully commited that for. »

2020 celebrations of the International Day against nuclear tests

In advance of the 29th August, celebrations of the International Day against Nuclear tests took place in New York, on Wednesday 26th August, with a high-level on line event during which a statement was delivered by the European Union, among others.

On this occasion and to prepare the upcoming NPT Review Conference, that will take place in 2021, the CTBTO teams have published a brand new issue of the “SPECTRUM” magazine, to which ctrinbuted several members of the gro ppf Eminent People (GEM), including Mr. Bruno Tertrais. This publication which is now out after a long hiatus, is aiming at introducing the latest progress of the CTBT verification regime to a large audience. It also deals with political stakes related to the entry into force of the Treaty.